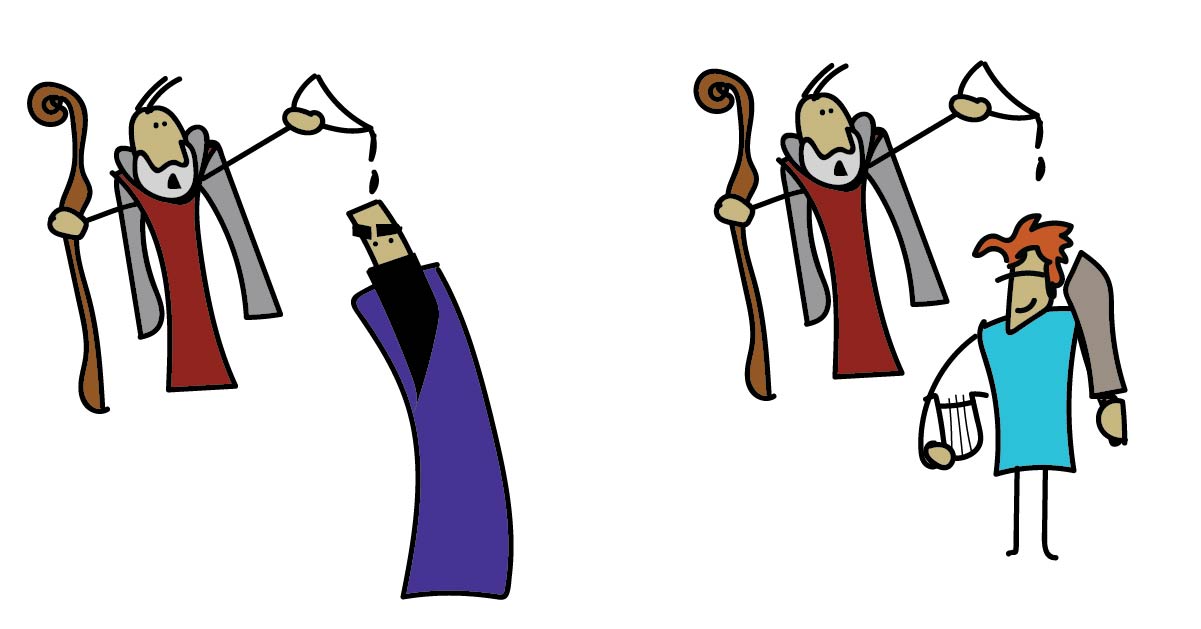 The book of 1 Samuel is full of Bible stories about David, especially the ones that we tell kids in Sunday school. But there’s a lot more to this book of the Bible than the stuff of VeggieTales.

My friends at CPH just released an uber-scholarly Concordia Commentary volume on 1 Samuel, and I thought it would be fun to take a spin through some of the little-known facts about this book. I partnered with them to make a list of tidbits they don’t teach you in Sunday school. ;-)

1. First and Second Samuel were originally one book 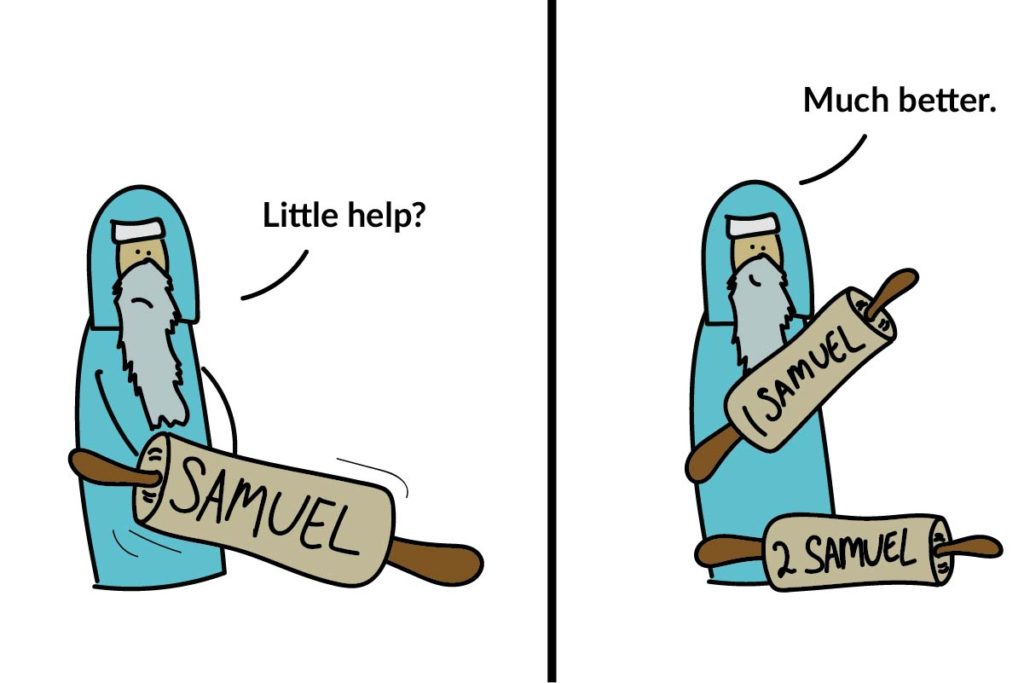 The Old Testament was written on scrolls. Originally, the Israelite scribes wrote and copied the books of the Old Testament as single-page, super-long documents. They did this in the Hebrew language, which, when written, only required the consonants. (Vowels were left out of the manuscript and “read in” by the Israelite readers.)

But over time, Jewish scribes felt the need to translate these scrolls from Hebrew into Greek (the common language of their day). The Greek language uses consonants and vowels, which meant that almost every word of every book of the Old Testament grew longer in character count.

So when it came time to translate the book of Samuel into Greek, they had a problem: the new Greek text was far too long to fit on one scroll. To make the book easier to carry around, they split the book into two scrolls. The first covered the narrative up to the death of the first king Saul. The second focused on David’s reign thereafter.

That division stuck, and so we ended up with two books of Samuel in our modern Bibles.

Aside: If you’d like to learn how to study the Bible in its original languages, you might want to check out what my friends at Zondervan Academic have put together. They have online video courses in Hebrew, Greek, and Aramaic—plus a certificate program in all three.*

The two-part book of Samuel explains how Israel transitioned from the loose theocratic confederacy of Judges into a unified monarchy under Saul and David. The books of 1 and 2 Kings pick up where Samuel leaves off, telling us how that monarchy is fragmented into two distinct kingdoms, which eventually fall into captivity at the hands of other world empires.

And heads up: 1 and 2 Kings were originally a single book, too.

Because the books of Samuel and the books of Kings deal with the rise and fall of Israel’s various dynasties, the ancient Israelites and the early church thought of them as a four-volume set. In fact, the Latin Vulgate and the Septuagint referred to the whole set as the four “Books of Kingdoms” or “Books of Kings.”

After the Reformation, the first two books of “Kings” were named “Samuel,” since the prophet Samuel anoints Israel’s first two kings.

3. 1 Samuel introduces the idea of a Messianic king 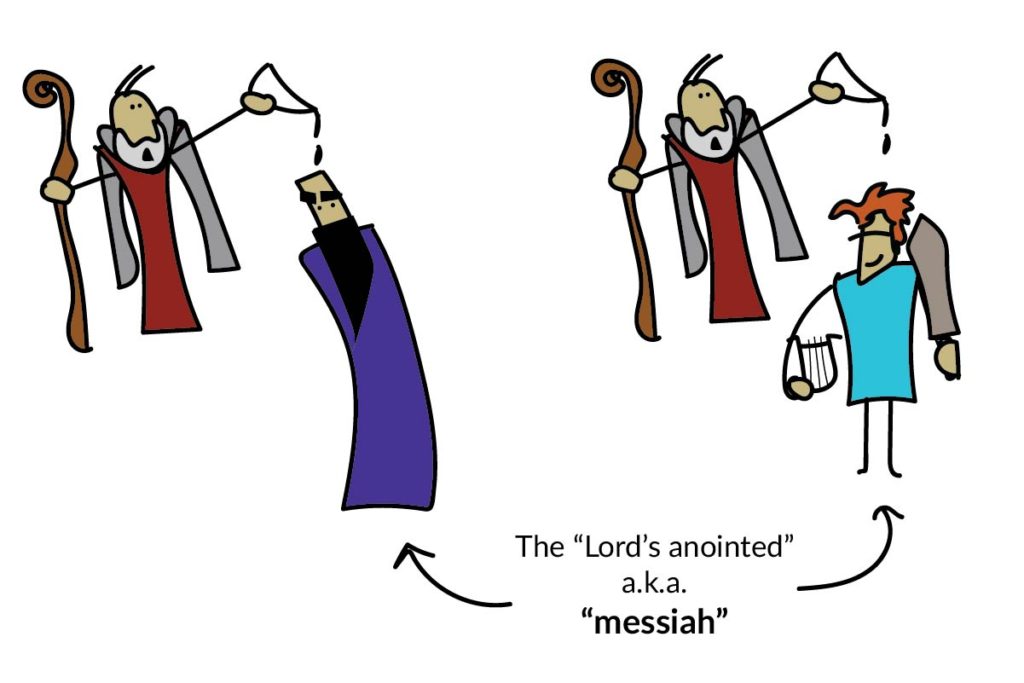 You’ve heard Jesus called the “Messiah.” This word comes from the Hebrew word for “anointed one,” and specifically refers to a long-awaited anointed King of the Jews.

And guess where that concept first arises in Scripture? That’s right: the book of 1 Samuel.

The prophet Samuel anoints both Saul and David as kings of Israel by pouring oil on their heads (1 Sa 10:1; 16:13). Throughout the book of 1 Samuel, David refers to Saul as “the Lord’s anointed,” or, “the Lord’s messiah.”

But it’s not Samuel, Saul, or David who first talk about the messiah in the book of Samuel. Instead, it’s Samuel’s mother Hannah. At the beginning of the book, Hannah is childless, but prays desperately for a son. When God hears her prayer, Hannah dedicates the boy Samuel to service in God’s tabernacle.

After dedicating Samuel, Hannah prays to the Lord, and closes her prayer with this line:

The LORD will judge the ends of the earth;

And He will give strength to His king,

And will exalt the horn of His anointed.

Hannah anticipates a king anointed by God, through whom the Lord will judge the whole earth. Neither Saul nor David completely fulfilled this prophecy—it points to a far greater King who came later.

Traditionally, Samuel played some role in writing the narrative we find in 1 Samuel. But since his death is recorded in chapter 25, it’s unlikely that he wrote both books that bear his name.

The Chronicler believes that Samuel recorded at least some of the acts of David. He states that when Samuel’s work is combined with the works of two other prophets, one has a full picture of David’s story (1 Ch 29:29).

Those other prophets are Nathan and Gad. Nathan is known for famously confronting David after he murders Bathsheba’s husband. He was also the one to bring David the good news of God’s everlasting covenant with the king. Gad is less well-known, but was a prophet nonetheless who traveled with David and spoke to him on God’s behalf from time to time.

The Chronicler states that the writings of Samuel, Nathan, and Gad tell of all David’s acts. This has led to some church traditions that the books of Samuel were actually written based on the works of all three prophets.

There’s a lot more to learn about 1 Samuel

As you can see, there is a lot to learn about this book of the Bible beyond the cool Sunday school stories!

If you like these kinds of facts, you might want to pick up some more in-depth resources on 1 Samuel. My friends at Concordia Publishing House just released the Concordia Commentary on 1 Samuel, which gives you a scholarly look at the text of this book of the Bible. If you’d rather have a more personally-applicable study companion as you work through 1 Samuel, consider The People’s Bible Commentary volume on 1 & 2 Samuel.