Judges: a cycle of sin and deliverance

Judges is the account of how Israel behaves between the death of Joshua and the leadership of a king. Instead of remaining loyal to God and following His laws, these generations of Israelites wander in their faith, worshiping idols, indulging in violence, and descending into chaos.

The book of Judges features a host of characters. It’s here we find the stories of well-known Sunday school staples like the reluctant warrior Gideon and the strongman Samson. We also find a few brief appearances of important characters from the Torah, like Caleb and Phinehas (Jdg 1:12–15; 29:27–28). The book lists 12 titular judges, corresponding to the 12 tribes of Israel.

Because the book of Judges covers such a broad stretch of time and space, it’s more important to examine the structure of the book itself, rather than the characters. The book of Judges falls into three large sections, each of which has some mild overlap: the introduction, the judges, and an appendix of stories that show the state of the nation.

This section briefly lays out a few challenges that the nation of Israel faces, then frames the rest of the book.

First is the death of Joshua. During the Israelites’ journey from Egypt to the promised land of Canaan, God had endorsed two national leaders: Moses for the first generation, and then Joshua for the next. The God of Israel parted the Red Sea for Moses and later parted the Jordan River for Joshua—both times giving the nation a clear sign that God planned to protect and provide for those who followed these leaders. The people of Israel were loyal to God during Joshua’s lifetime—but when Joshua dies, God doesn’t choose a successor. The individuals, families, and tribes of Israel are responsible for abiding by God’s laws themselves.

Second is that the Torah is forgotten. Generations after Joshua forget how the Lord rescued Israel from the gods of Egypt (Ex 12:12) and made them his special nation in the wilderness. They forget Moses’ call to choose God’s blessings, and his warnings about the destruction that awaits if the nation is disloyal to their God.

Second is the influence of the land’s original inhabitants. Some of Canaan’s native people survived Joshua’s conquest of the land, keeping their cities, their cultures, and their religious practices. When the people of Israel mingle with the Canaanites (and especially when they intermarry), their loyalties become divided between the God of Israel (who gave them the land) and the gods of the Canaanites.

When Israel worships other gods, the Lord revokes his protection. This results in foreign people groups invading and oppressing Israel, until things reach a point at which the people of Israel cry out to God for help. When they do this, God sends a deliverer (called a judge) to rally the people, overthrow the invaders, and give the nation peace.

Peace, that is, until Israel strays again, and the cycle repeats.

This section again states the cycle that Israel and God find themselves in, then tells the stories of 12 judges whom God raises up to deliver Israel. This section falls into two sections, with a leading group of seven “former judges” and a group of five “latter judges” afterward. Each group of judges follows a similar pattern—the first and final major judges experience God’s Spirit, and the final major judges are even announced by angels. But when coupled together, both sets of judges show a that Israel’s leaders aren’t getting better—they’re getting worse.

The former judges section begins with Othniel, a member from a prominent family (the late, great Caleb). The Spirit of God comes on Othniel, he restores peace, and the story moves on. Ehud and Deborah both take their turns delivering Israel from the cycle after this. This section climaxes with the story of Gideon, a judge announced by God who leads a militia to score miraculous defeats against Israel’s enemies. The Spirit of God comes on Gideon, and the people of Israel try to make him king (he refuses). After he dies, his son tries to claim the throne, throwing Israel back into chaos. (Shamgar, Tola, and Jair are mentioned in this section, but briefly.)

The latter judges section opens with Jephthah, an illegitimate son from a prominent family. The Spirit of God comes on Jephthah, but the military leader’s efforts still end in tragedy. Minor judges Izban, Elon, and Abdon get brief mentions. But the section ends with Samson. A miracle child heralded by divine announcement, he grows up to become a one-man army against Israel’s enemies. When the Spirit of God comes upon Samson, he is able to accomplish feats of supernatural strength.

Whereas the former judges section boasts four major judges, the latter section only includes two—half as many. Both sections being with a judge from a wealthy family, but while Othniel is associated with the God-fearing Caleb, Jephthah’s father beds a prostitute. The final major judge in both sections wins miraculous victories, but while the people of Israel propose making Gideon king, the people actually hand Samson over to their enemies. Despite God’s help, Israel’s leadership is sliding from bad to worse.

The third act opens with yet another story about Samson, as the book transitions from showing the decline in Israel’s leadership to showing how the nation overall has descended into chaos. Samson is taken prisoner by Israel’s enemies. Elsewhere, a family of Israelites sets up their own invented god, with their own invented priesthood. Elsewhere still, an entire tribe of Israelites abandons their territory and raids another town—becoming the oppressors themselves. And Judges ends with the most chaotic story of all, in which rape leads to murder, murder leads to war, war leads to an entire tribe almost going extinct, and the solution being … more rape.

It’s moral chaos, and for each episode, the author reiterates that this is what happens when there’s no king in Israel.

“The anger of the LORD burned against Israel, and He gave them into the hands of plunderers who plundered them; and He sold them into the hands of their enemies around them, so that they could no longer stand before their enemies. Wherever they went, the hand of the LORD was against them for evil, as the LORD had spoken and as the LORD had sworn to them, so that they were severely distressed. Then the LORD raised up judges who delivered them from the hands of those who plundered them.” (Jdg 2:14–16) 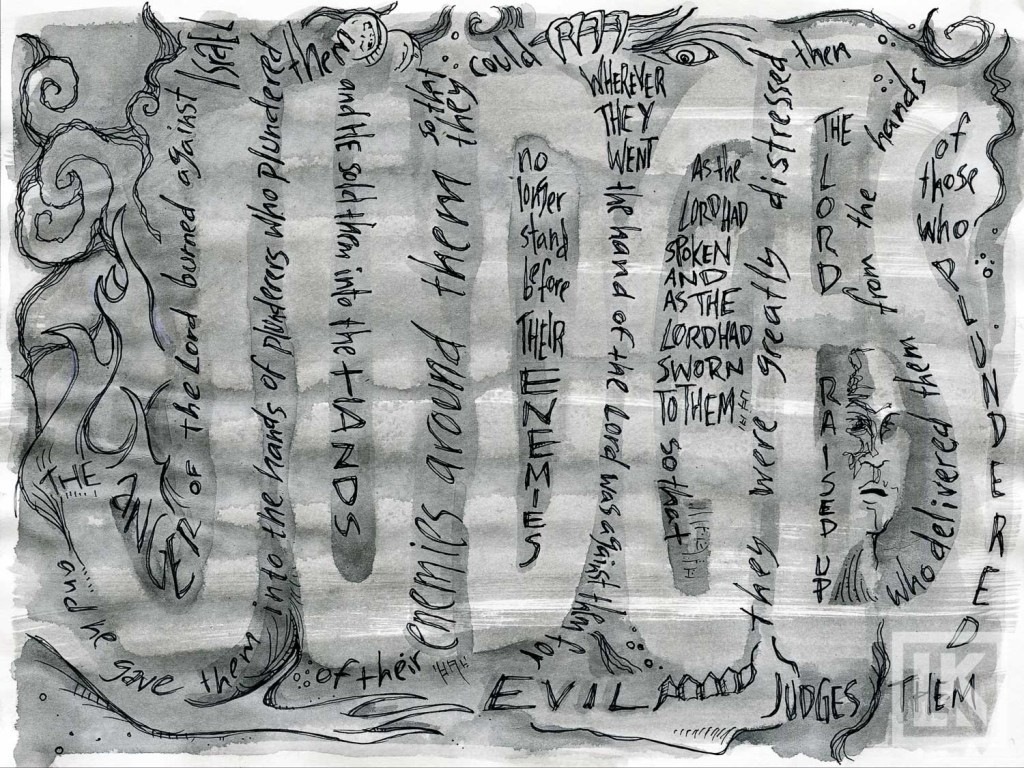 Judges’ role in the Bible

The period of judges is a dark era in Israel’s history. This book shows how persistent Israel is in forgetting the Lord, and how faithful God is to discipline and deliver His people.

It’s in Judges that we see Israel’s need for a Messiah, a godly king. Because there is no good king in Israel, everyone does what is right in their own eyes (Jdg 21:25).

Both Judges and Ruth tell us how bad things were in Israel before God gave them a king, but anticipate the coming of the good king David.

The writer of Hebrews references several characters from Judges as examples of Old-Testament characters who gained approval through faith. Though Judges describes the consequences of unbelief in grim detail, we also see is a series of vignettes displaying the powerful, positive effects of faith in a faithful God.