The 12 Tribes of Israel in the Bible: a Quick, Illustrated Guide

The nation of Israel was made up of tribes—the families descended from Jacob’s sons (and grandsons). To the earliest readers of the Old Testament, these names were common knowledge. Which means when words like “Levi,” “Judah” and “Ephraim” show up in the Bible, they usually don’t come with an explanation—the authors assumed the first readers understood.

Kind of like how I can assume my readers in the US immediately know what I’m talking about if I reference “D.C.,” “Houston,” or “Chicago.”

But we’re not from ancient Israel. So sometimes it helps to get a little backstory on those tribes—since we didn’t grow up hearing about them all the time.

So I’ve pulled together some info on the 12 tribes of Israel for you. Enjoy! 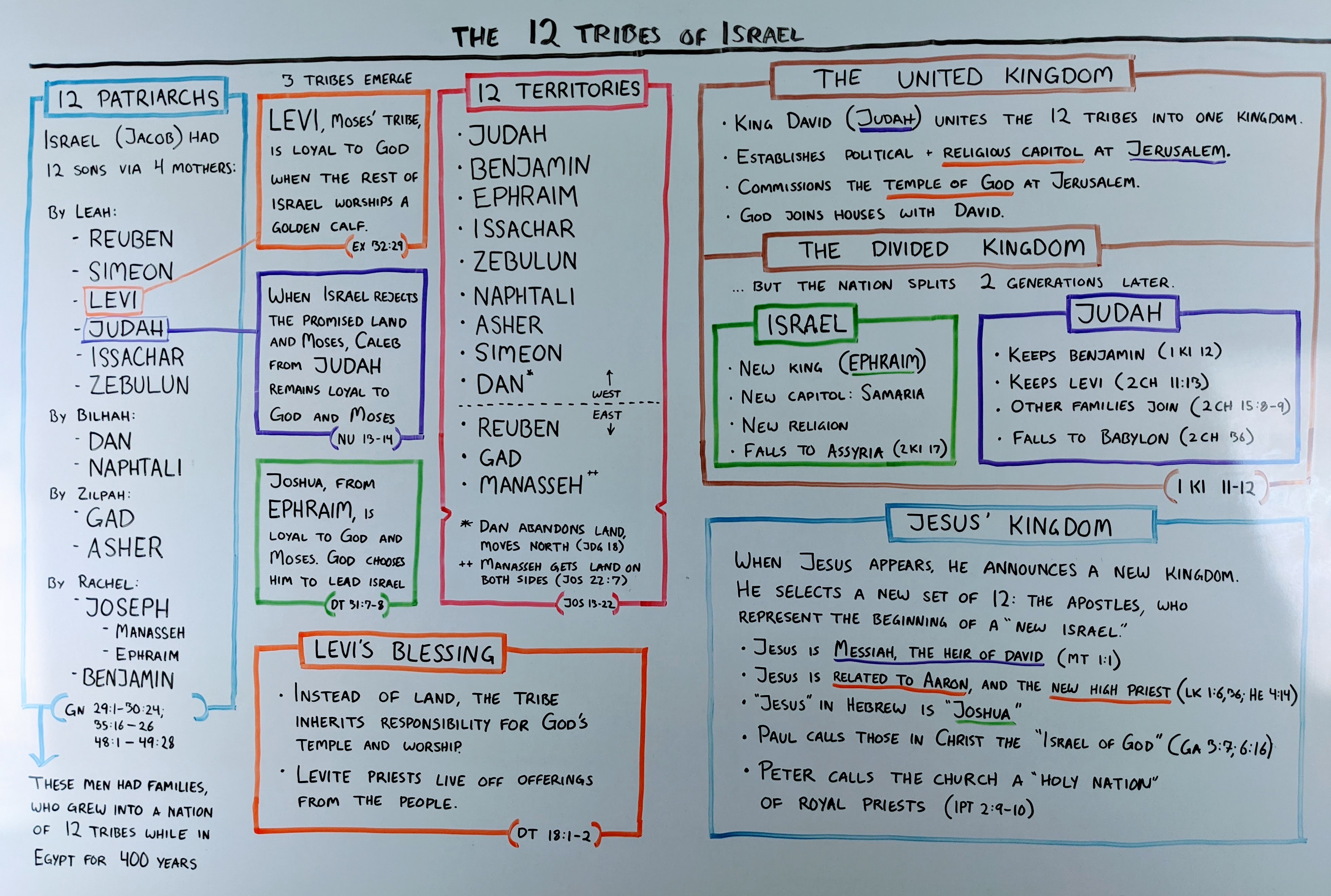 The tribe of kings, and the most preeminent of the 12 tribes in the biblical narrative. Judah “prevailed over his brothers,” (1 Chronicles 5:2), and the tribe’s territory included the city of Jerusalem and the holy temple. King David was part of this tribe, and his royal line ruled in Jerusalem from around 1,000 BC until the city fell to Babylonian forces in 586 BC. Jerusalem was the capital of Israel and the capital of the Southern Kingdom after the nation divided. Jesus is of the tribe of Judah (Matthew 1:1–2). Notable tribesmen: Jesus, David, Mary, Solomon, Caleb

Descended from Jacob’s firstborn, whom Jacob said was as “uncontrolled as water” (Genesis 49:4). The tribe chose not to settle in the Promised Land, and instead asked Moses for some of the territory that they conquered east of the Jordan River. Moses agreed to this, on the condition that they assist the western tribes in conquering Canaan (Numbers 32:28–32). They did so, but they did not assist the other tribes in battle during the period of judges (Judges 5:16), and the tribe falls into scriptural obscurity.

The man Simeon (with his brother Levi) slaughtered the men of an entire city to avenge his sister (Genesis 34:25–31). The tribe’s portion of land was within the midst of Judah’s territory (Joshua 19:1); however, Simeon did not grow as rapidly as Judah and seems to have dispersed across multiple territories (1 Chronicles 4:38–43; 2 Chronicles 15:8–9). This is consistent with Jacob’s prophecy concerning Simeon and his brother Levi: “I will disperse them in Jacob, and scatter them in Israel.”

The tribe of the priesthood. The tribe of Levi stood by Moses (a Levite) during the golden calf incident at Mount Sinai (Exodus 32:25–29), and later took their place as ministers to the tabernacle, and later the Temple. Levi had no tribal territory—the Lord was the tribe’s inheritance (Numbers 18:19–20)—though they did receive pasture lands for their cattle (Joshua 21). Levitical duties were extensive (read Leviticus!), but Moses gives a brief summary of their significance in his blessing for the tribe (Deuteronomy 33:8–11).
Notable tribesmen: Moses, Aaron, John the Baptist, Barnabas

Zebulun doesn’t get very much attention in the Bible. The tribe does boast a strong, loyal fighting force during the days of the judges and King David. In fact, Zebulun had the largest presence in the army that made David king of Israel at Hebron, and they served him with “an undivided heart” (1 Chronicles 12:33).

Issachar has even less biblical presence than Zebulun, but the tribe was loyal to Deborah and Barak (Judges 5:15). They’re also remembered as “men who understood the times, with knowledge of what Israel should do” (1 Chronicles 12:32).

We don’t read much about the man Dan, but we do see his tribe up to no good in the book of Judges. The tribe did not secure their original portion of land (Judges 1:34; 18:1), and instead migrated northward. In the process, they took for themselves other gods (Judges 18:14–17) and set up a new priesthood (Judges 18–20). The tribe later joins Jeroboam in idolatry when the kingdom of Israel divides (1 Kings 12:28–29). Notable tribesman: Samson

Little is said of Gad, the man or the tribe. They, like Reuben, settled east of the Jordan.

Jacob prophesied that Asher’s tribe would enjoy rich foods (Genesis 49:20), and the tribe went on to possess a region of eastern Galilee which is still known for its olive groves.

Naphtali, with Zebulun, is mentioned by the prophet Isaiah in a passage we read often during Christmastime: “For a child will be born to us . . . .” This promise was given concerning the land of Galilee, specifically, the “land of Zebulun and the land of Naphtali.” You can read the whole prophecy in Isaiah 9.

This tribe is named after Joseph’s son. Joseph received the birthright from Jacob, and instead of just one tribe, he is the ancestor of two (Manasseh is the other). After the kingdom divides, the Northern Kingdom’s capital is in Ephraim’s territory, and the prophets sometimes refer to the entire nation as “Ephraim” (Jeremiah 31:9, Hosea 5:3). Notable tribesmen: Joshua, Samuel

This small tribe has played several important roles in Israel’s history. Benjamin stood against the rest of Israel in a national civil war (Judges 20:14–21:24). Saul, the first anointed king of Israel, was from Benjamin. The tribe was also loyal to David’s descendants when the northern tribes seceded (1 Kings 12:16–24). Notable tribesmen: King Saul, Mordecai, Paul

This tribe descended from Joseph’s firstborn son, and uniquely settled on both sides of the Jordan River (Joshua 17:5–6). The eastern settlement is often referred to as the “half-tribe of Manasseh.”

Kind of. Remember, Levi didn’t receive tribal territory like the other tribes. Also, Joseph’s sons were considered heads of their own tribes—both of which received an inheritance of land. In some lists, Joseph is counted as one of the 12 (Genesis 49; Deuteronomy 33). In others, Levi isn’t counted, and Ephraim and Manasseh are considered distinct tribes.

You can see the tools I used to put this list together on the original blog post. Heads up: at the time I wrote the original, I was an employee of Logos.

The story of the 12 tribes of Israel

Quick note: I made a weird mistake on this. Reuben didn’t sleep with Zilpah, he slept with Bilhah. (Which is just as messed up.) When we update this infographic, that’ll get fixed. =)

What happened to the tribes in the divided kingdom?

After Solomon’s reign, the kingdom of Israel divides. Some tribes remain loyal to David’s bloodline (the Southern Kingdom), but most tribes rebel and form their own new nation (the Northern Kingdom).

The prophet Ahijah illustrates this by tearing his cloak into 12 pieces and giving 10 pieces to Jeroboam, who would rule the Northern Kingdom. He says that one piece (Judah) will remain with Solomon’s son for the sake of God’s covenant with David (1 Ki 11:31–32).

So a little more math:

The tribe of Levi was also aligned with the South. Jeroboam set up a new priesthood to false gods in the North, and so because the temple of the Lord was in Judah, the Levites migrated there (2 Chr 11:13).

However, several members of Ephraim,  Manasseh, and Simeon defected to Judah when they realized that God was with the righteous King Asa (2 Chr 15:9).

So, that’s the list of tribes, and an idea of what happened to them when the kingdom split. You can read about the divided kingdom in the summary of 1 & 2 Kings.

Want to download the 12 Tribes of Israel infographic? Here’s a link to the printable PDF. You can save it for future reference or send it straight to the printer.