The books of First and Second Kings are the story of Israel’s decline. Whereas First and Second Samuel document Israel’s shift from corrupt judges to the righteous leadership of David, Kings shows how Israel divides and falls into the hands of her enemies.

These books of history pick up where Second Samuel left off: Israel is united under the godly King David, who appoints his son Solomon to rule after him. Solomon is blessed with wisdom, and charged with building a majestic temple to the Lord in Jerusalem. God tells Solomon to remember Him and follow his father David’s example.

Unfortunately, Solomon is unfaithful to God in his later years, and God divides the kingdom after his death. The northern ten tribes follow Solomon’s former warrior and taskmaster Jeroboam, and the tribes of Judah and Benjamin remain loyal to the throne of David. The rest of these books document the way these kings (and those who followed) lead God’s people to worship. Each king is remembered according to whether or not they lead Israel to worship God in Jerusalem or worship idols elsewhere.

Neither the Northern Kingdom (Israel) nor the Southern Kingdom (Judah) keep the Law of Moses and worship God at Jerusalem, and therefore both are taken captive by enemy nations. Israel is taken by Assyria (2 Kgs 17:6–23) and Judah falls to Babylon (2 Kgs 25:1–26)—which is just what God promised would happen if they disobeyed His law (Dt 28:36–37).

“As for you, if you will walk before Me as your father David walked, in integrity of heart and uprightness, doing according to all that I have commanded you and will keep My statutes and My ordinances, then I will establish the throne of your kingdom over Israel forever, just as I promised to your father David, saying, ‘You shall not lack a man on the throne of Israel.’ But if you or your sons indeed turn away from following Me, and do not keep My commandments and My statutes which I have set before you, and go and serve other gods and worship them, then I will cut off Israel from the land which I have given them, and the house which I have consecrated for My name, I will cast out of My sight.” (1 Ki 9:4–7) 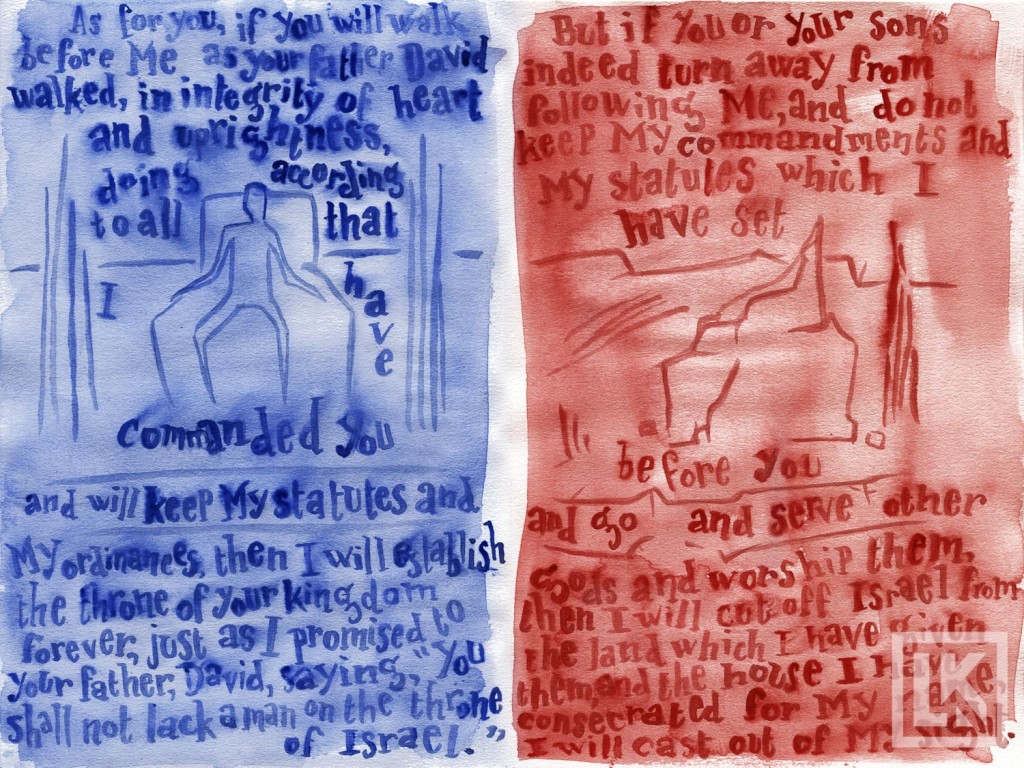 The books of Kings were probably written during the time of Judah’s captivity in Babylon (which begins at the end of Second Kings). The temple of God was destroyed. Jerusalem was in ruins. The tribes of Judah, Benjamin, and some of Levi were serving a pagan king in a faraway country. These books answer the questions, “What happened? How did it come to this?” that captive Hebrews would have asked.

The response: “Whom did you worship?”

The kings are evaluated by how they worshiped the Lord God. Good kings served the Lord in the temple at Jerusalem, the others did evil in His sight. Two kings set examples for the rest of the nation: David and Jeroboam. David honored God and upheld His law. Jeroboam disregarded God and His temple, and instead set up two golden calves to worship.

The books of Kings show us how faithful God is to His people. We see the full spectrum of God’s dealings with Israel: from extreme blessing under Solomon to utter desolation and captivity. These blessings and curses were all promised to Israel in the book of Deuteronomy.