Interesting Facts about the Bible 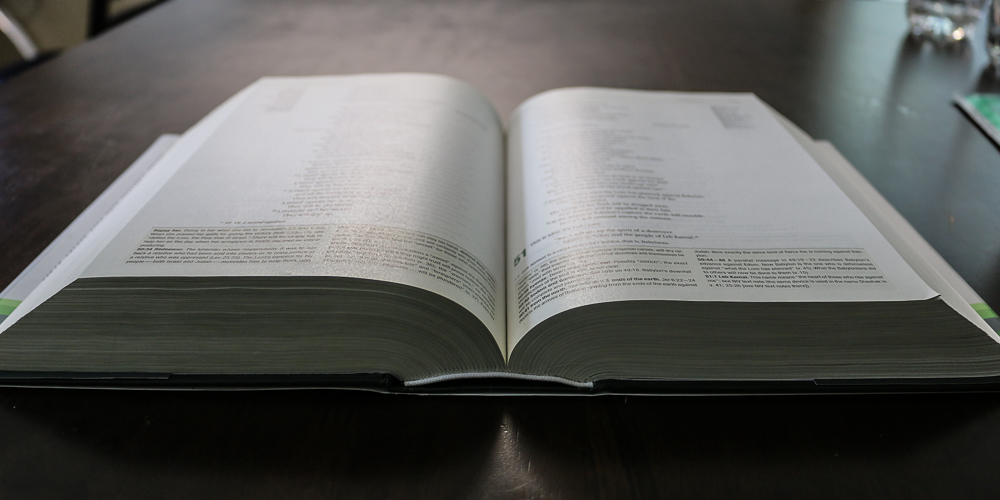 Want more than just the facts?

I wrote The Beginner’s Guide to the Bible to give people a non-preachy, jargon-free overview of what the Bible is, what it’s for, and what it’s all about. You’ll walk away from it with enough knowledge to have a thoughtful conversation about the Bible with a pastor, an atheist, or anyone else.

1. The Bible was written in three languages

If you’d like to learn how to study the Bible in these languages yourself, check out Zondervan Academic’s certificate program.*

In those original languages, the Bible’s word count is about 611,000.

That word count is not going to line up with your Bible though, for a few reasons:

But even so: it’s interesting to think that while the Bible is longer than Moby Dick, it’s nowhere near as long a read as the Harry Potter saga. You can learn more about just how long the Bible is here.

3. The longest book of the Bible is Jeremiah

This prophet had a lot to say. He even wrote in the twentieth chapter of his book:

But if I say, “I will not mention his word or speak anymore in his name,” his word is in my heart like a fire, a fire shut up in my bones. I am weary of holding it in; indeed, I cannot. (Jeremiah 20:9)

Granted, Jeremiah is the longest book based on how we currently arrange the books of the Bible. If we did it the old school way, the two-part book of Kings would be the longest book. (See Fact #9!)

And if we did it really, really, really old school, the five-part Torah (Genesis, Exodus, Leviticus, Numbers, and Deuteronomy) would dwarf all other contenders. This megabook alone makes up about one fifth of the whole Bible!

You can learn more about the longest books of the Bible here.

4. The shortest book of the Bible is 3 John

You can read this book in about one minute. The book right before it, 2 John, is the second-shortest book of the Bible. You can learn more about the shortest books of the Bible here.

5. The Bible was written by more than 40 traditional authors

The reality is a bit messier than this, of course. Moses probably didn’t pen every word of Genesis–Deuteronomy—he died before some of the events happened! And there’s a good chance Jonah didn’t write Jonah, and Isaiah may have had some help over the centuries, and so on and so forth.

Plus, there are some books whose authors we just don’t know. (See Fact #10.)

6. The Bible was written by people from diverse occupational backgrounds

Parts of the Bible were written by kings. Half of the Psalms, a good chunk of Proverbs, and Ecclesiastes seem to be penned by royalty.

But other parts of the Bible are written by farmers, fishermen, a tentmaker, homeless prophets, a doctor, a professional scribe, vocational musicians, pastors, etc.

7. The books of the Old Testament are arranged differently in Judaism

The English Bibles we use group the books of the Bible loosely by type of literature. So in the Old Testament, you have the books of law first, then books about Israel’s history in the promised land, then books of wisdom and poetry, then books by the prophets.

But the Old Testament isn’t always arranged this way. For example, in Judaism’s Hebrew Bible (the TaNaKh), the books of law come first (the Torah), followed by the former and latter prophets (a blend of prophets and history), followed by “the writings” (a blend poetry, history, and prophetic books). In this arrangement, the last book is Chronicles, not Malachi.

About 150 of these are in the book of Psalms. (I say “about” because there’s some debate as to whether a few of the separate Psalms were originally meant to be sung as one.) But throughout both the Old and New Testaments, people will sing songs about God or the events around them.

And 185 is a bare minimum—that’s only if you count the portions of Scripture that are specifically labelled as “song,” “psalm,” “dirge,” or “chant.”

9. Some of the “First” and “Second” books were divided after they were written

I mentioned in Fact #3 that if the books of 1 & 2 Kings were combined, they would be the longest book of the Bible. I bring that up because 1 & 2 Kings were originally written as one book. The same goes for 1 & 2 Samuel and 1 & 2 Chronicles.

Why did these books get split? Because in the old days, they couldn’t print massive tomes for each book of the Bible. It was hard to fit the very lengthy works on one scroll—and even if the scroll was big enough for all that content, it would be too heavy to manage. So they broke some of the longer books down into two volumes. So the book of 2 Samuel is really more like the book of Samuel, part two.

10. The authorship of Hebrews has remained anonymous for centuries

Several books of the Old Testament were written by people unnamed. Tradition doesn’t identify the authors of Joshua–Kings, Esther, or Job. Plus, many of the books with traditional authors assigned to them were likely penned and edited by other people. For example, while Jonah is the traditional author of Jonah, there’s a good case to be made that some later scribe wrote this satire of the compassionate God, the rebellious prophet, and the repentant cows.

The church has been (roughly) consistent with assigning authors (or at least names of authors) to books in the New Testament. Even works that are technically anonymous, like the Gospels, were so important that the early church leaders consistently assigned their authorship to either the same traditional person or a small group of candidates.

But the book of Hebrews is a glaring exception. Authorship of this book has been debated for centuries. Augustine was sure Paul wrote it. Luther was convinced it was the eloquent Apollos. Tertulian assigns the work to Barnabas. But we just don’t know.

Granted, there seems to have always been a large group of Christians who doubt Simon Peter wrote 2 Peter. But pseudepigraphy is a whole other ball of wax. ;-)

11. The word “Trinity” is never mentioned in the Bible.

Most Christians believe that God eternally exists in three persons: The Father, the Son Jesus Christ, and the Holy Spirit. And all three are referred to as divine in Scripture—in fact, I’ve found 20 times when the three of them are mentioned in the same verse.

However, do a word search: the word “Trinity” doesn’t come up.

12. The Bible was written on three continents

Most was written in what is modern-day Israel (Asia). But some passages of Jeremiah were written in Egypt (Africa) and several New Testament epistles were written from cities in Europe.

13. There are 21 dreams recorded in the Bible

And most of them are had by two different men named Joseph! You can see the whole list here.

14. The book of James is the bossiest book of the Bible

If you make a list of words in each book of the Bible and then a list of commands in the same book, the book with the highest concentration of words is the book of James. (You can read about how I found this here.)

I’ll be docking more facts here as I keep studying and writing about the Bible. Stay tuned. =)