Amos was a simple shepherd in the Southern Kingdom of Judah (Am 1:1). He wasn’t a prophet. There were no prophets in his family. But God had a message for the rebellious Northern Kingdom of Israel, and He chose Amos to deliver it (Am 7:15).

God had made Israel His chosen people (back in Exodus), and He was to be their God. But when the kingdom divided, the northern tribes turned their backs on Him. The Lord’s temple and priests were still in Zion, but Israel worshiped new idols at the cities of Bethel and Dan (1 Ki 12:28–30) and created a new order of priests (1 Ki 12:31), and listened to false prophets.

God had promised to bless the nation if they obeyed Him and curse them if they rebelled (in Deuteronomy). Israel rebelled, and now judgment is coming. But God isn’t going to punish Israel without explaining what’s going on (Am 3:7).

So Amos, the shepherd, the tree trimmer, goes to Bethel (a royal city of idol worship) and proclaims God’s message of justice, punishment, and restoration. He makes two bold prophecies:

As you can imagine, this message doesn’t sit well with Jeroboam II and his false priests. But Amos answers to the Lord, not Israel (Am 3:8):

A lion has roared! Who will not fear?
The Lord GOD has spoken! Who can but prophesy?

And when Israel rebels at Bethel, the Lord roars from Zion (Am 1:2).

“‘Behold, the eyes of the Lord GOD are on the sinful kingdom,
And I will destroy it from the face of the earth;
Nevertheless, I will not totally destroy the house of Jacob,’
Declares the LORD.” (Am 9:8) 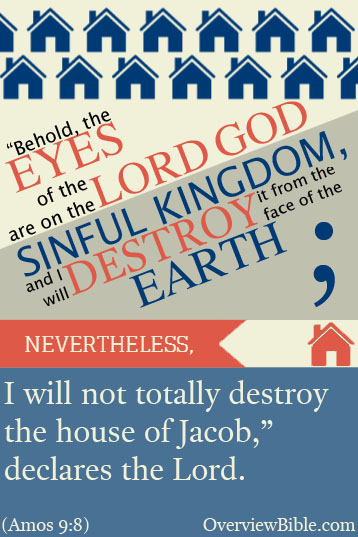 Amos’ role in the Bible

Amos is the third of the Minor Prophets, the last twelve books of the Old Testament. When God had a message for the people, He gave his message through the prophets. These messages came in visions, oracles, dreams, parables, and the like.

Amos’s ministry may have been the earliest of the Minor Prophets’. He preached during the reigns of Uzziah in Judah and Jeroboam II in Israel (probably no later than 750 B.C.), two years before a major earthquake *(Am 1:1). The prophets Hosea (Hos 1:1) and Jonah (2 Ki 14:23–25) also ministered to Israel during Jeroboam II’s reign.

Amos was a prophet from the South (Judah) whom God sent to the North (Israel). This book focuses on God’s sovereign justice:

Amos claims that Israel will be carried away into exile as punishment for their rebellion. His prophecies come true when the Assyrians conquer the Northern Kingdom (2 Ki 17:6–23).

The writer of Second Kings tells us that God’s prophets urged Israel and Judah to turn from their evil ways and keep God’s commandments, but the people stubbornly ignored them (2 Ki 17:13–14). Amos is an example of this. When God sent Amos with a message of judgment, the false priest tries to silence him (Am 7:10–13).

Amos gave his message during a time of prosperity in Israel—prosperity that God had mercifully given them through the wicked king Jeroboam II (2 Ki 14:24–28). The book of Amos reminds us that God’s blessings don’t always coincide with our obedience (and are often in spite of our disobedience).

Amos also shows us that God demands justice for the poor. During their time of God-given security, Israel had abused her most insecure citizens (Am 4:1; 5:11–12)—a crime God considers worthy of punishment. God’s standards on this haven’t relaxed with time. According to the apostle James, God still expects the rich to deal justly with those around them, and will punish those who oppress the poor and the righteous (Ja 5:1–6).

Even though the book of Amos is a message of impending doom, it isn’t without notes of hope and restoration. Amos urges the people to “seek the Lord that [they] may live” (Am 5:4–6, 14–15), and even foretells of a day when Israel will be restored from captivity (Am 9:14–15) and reunited with Judah under David’s line of kings (Am 9:11).