The apostle Andrew: the infographic 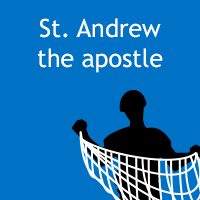 The apostle Andrew is a bit of a mystery: he’s Simon Peter’s brother, but he’s way, way in the background compared to his brother. I’m getting to know all 12 apostles a little better, and Andrew has been an interesting character to study.

I’ve always liked the apostle Andrew. He just seems like an inviting, approachable guy. Plus, if you look up his name in a Greek lexicon, you’ll see it means “valor,” “strength,” and “all-around manliness.” So it’s no wonder he’s always depicted with such an epic beard.

So let’s get to know the apostle Andrew—who is this guy?

The apostle Andrew: the infographic

A few quick facts on St. Andrew the apostle

Meet the rest of the apostles

My wife and I are making portraits and infographics of all 12 apostles. It would be a shame if you missed any of them. But there’s an easy way to make sure that never happens: sign up for our email newsletter now.