Jerusalem has already been conquered twice. The first time, the Babylonians took Daniel and the noble families of the land (Dan 1:1–3, 6) back to Babylon. Eight years later, the Jews rebelled, and the Babylonians took the king and 10,000 captives. One of those captives was a priest named Ezekiel.

All this had happened because the Jews had broken God’s laws. They were supposed to worship God and God alone, but they turned to the idols of the surrounding nations. They desecrated the temple of the Lord and brutally persecuted His prophets.

So God disciplined them (like He said He would in Deuteronomy). The Babylonians came once. Then they came again.

But instead of turning to God, the people still chased the gods of the nations. They still mistreated the poor. They still disregarded God’s laws.

Now it’s been five years since the Babylonians last attacked Jerusalem. The Jews in the city would soon revolt again (2 Ki 24:20), but they’d been rebelling against a far greater King than Nebuchadnezzar for a long, long time.

Israel has a worship problem that they cannot, cannot fix. But even now, God doesn’t leave them without hope. He chooses a man to speak for Him to the people, to tell them the error of their ways and teach them justice. He chooses a watchman to warn Israel of the coming storm (Eze 3:17).

Ezekiel is the watchman. And he sees some incredibly sad things on the horizon:

But the good news is, that’s not all he sees.

Ezekiel may be the watchman, but it’s really God who is watching out for Israel—even as she rebels against Him.

Say to them, “As I live!” declares the Lord GOD, “I take no pleasure in the death of the wicked, but rather that the wicked turn from his way and live. Turn back, turn back from your evil ways! Why then will you die, O house of Israel?” —God, to Ezekiel (Eze 33:11) 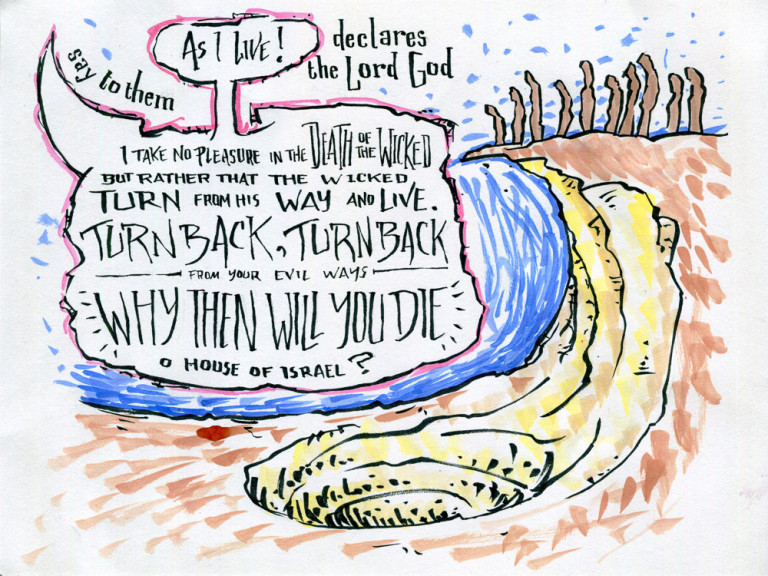 Ezekiel’s role in the Bible

Ezekiel is the fourth of the Major Prophets. When God had a message for the people, He spoke to them through prophets: men moved by the Holy Spirit to speak on God’s behalf.

Ezekiel has his fair share of oracles (verbal “burdens” from God), but this book is best known for Ezekiel’s visions. He sees some intense, intense things, including:

Take a spin through Ezekiel and you’ll find angels with four faces, wheels with eyes, and dry bones growing ligaments (which I imagine was like watching a zombie film backwards).

But Ezekiel isn’t the only prophet to have these kinds of visions. Daniel, Zechariah, and John have visions of a similar stock.

But with the larger-than-life visions and watchman status comes some tremendous hardships for Ezekiel. Jeremiah may be known as the weeping prophet, but Ezekiel has his share of suffering:

Ezekiel prophecies during the same time period as Jeremiah, but while Jeremiah is in Jerusalem and Egypt, Ezekiel is in the land of the Babylonians.

Ezekiel gives us a glimpse of the new relationship God plans to make with His people. His Holy Spirit will dwell within them (Eze 37:14). His glory will be among them (Eze 43:1–9). He will be their God, and they will be united under a righteous king (Eze 34:24). Ezekiel also devotes a great deal of attention to what the restored Israel’s land and temple will look like (Eze 40–48).

Ezekiel is the watchman, and through him we see some of God’s generous plans for Israel that have yet to come about.