Jude: fight for the faith!

Jude came from an important family:

Jude hadn’t always believed in Jesus (Jn 7:5;Mk 3:21), but after He rose from the dead, things changed. The world changed (Acts 17:6). His brother changed. Jude changed.

Now he shared this glorious salvation with people all over the world: Jew and Gentile, slave and free, male and female—all united in Christ. He  wanted desperately to write about it. But he couldn’t.

The church was facing a more pressing issue: people were creeping into the church unnoticed (Jd 4). These were not “seekers,” nonbelievers who were genuinely curious about Christianity.  They claimed to be believers. But they denied the exclusive authority of Jesus, twisting His grace into a license to sin all they wanted.

They were infiltrators. They indulged in sexual immorality, greed, and grumbling. They rejected the authority of the apostles, angels, and the Lord. They caused churches to split up into opposing factions.

The children of God needed to keep their eyes open for this kind of behavior in the churches. So instead of writing about the salvation they shared, Jude wrote a brief, hard-hitting letter to the churches of the world.

In just 25 verses, Jude covers a few important points for Christians to remember:

But Jude is more than just a detractor. He doesn’t just write a list of red flags. This is a letter that urges the Christians to “earnestly contend for the faith”—to fight long and hard on behalf of their Lord. And Jude tells them how to combat this attack:

Jude is a call to fight, but it’s not like any other battle cry in history. It’s a charge to delight in God and show mercy to others. This is how the church fights valiantly for the faith: by loving God and showing mercy.

[. . .] I felt the necessity to write to you appealing that you contend earnestly for the faith which was once for all handed down to the saints. (Jud 3b) 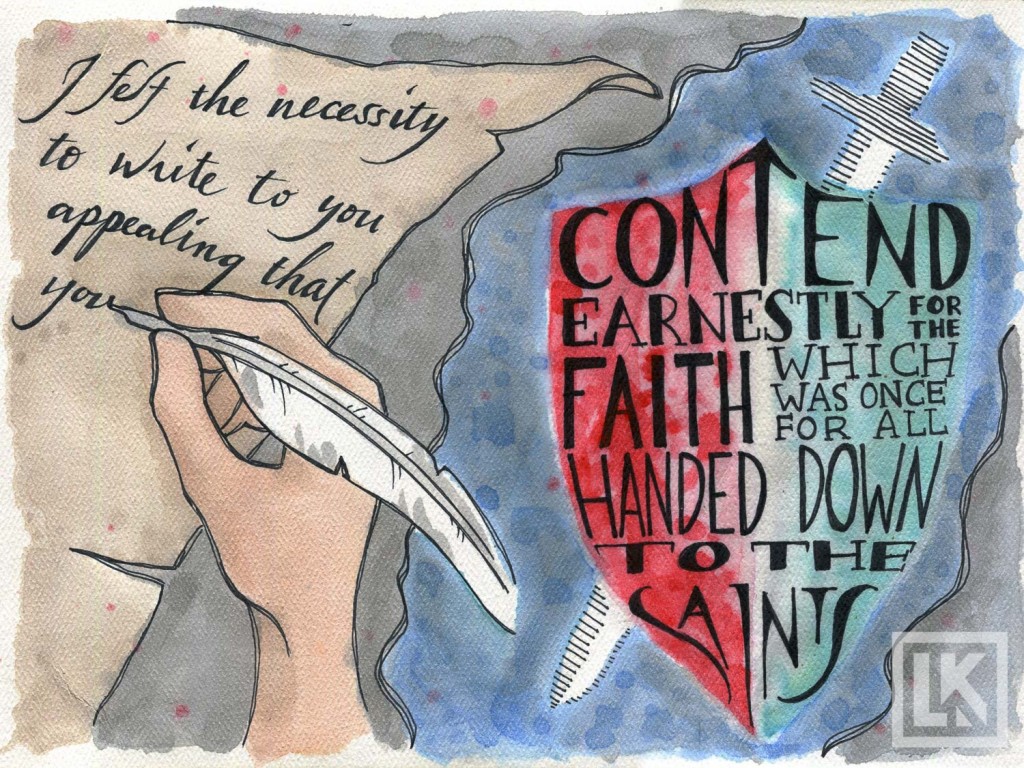 Jude’s role in the Bible

Jude is the seventh and last of the General Epistles (or Catholic Letters), the writings of apostles to the church at large. While Paul wrote to specific congregations and individuals, Peter, James, John, and Jude wrote to broader audiences across the Roman empire. We’re not sure when Jude was written.

Jude’s content mirrors the second and third chapters of Peter’s second letter. We don’t know if Peter borrowed from Jude’s letter, if Jude borrowed from Peter’s letter, or if both men were drawing from a prior discussion. Both letters, however, warn the church of two dangerous influences:

One major difference between the two books is Jude’s use of apocryphal literature (Jewish writings outside of the Scriptures). Jude mentions events that aren’t recorded in the Bible, such as an argument between Michael the Archangel and the devil over the body of Moses, or Enoch’s ancient prophecies. These examples come from the Assumption of Moses and First Enoch. Jude’s intended audience was familiar with these pieces, and therefore would have appreciated the references.

But Jude also relies heavily on the inspired Scriptures, especially Genesis and Numbers. Jude references all sorts of Old Testament figures and events, including:

Jude is only one chapter long, and it’s the fifth shortest book of the Bible (Third John is the shortest).