Nahum: it’s over for Nineveh

When Jonah warned Nineveh of God’s wrath, the Ninevites repented and God spared them. But their repentance didn’t take.

Nineveh was the capital of Assyria, and the Assyrian empire had only grown more mighty and more wicked since the time of Jonah. Nineveh continued to lead nations into idolatry (Nah 3:4). Plus, the Assyrians had touched Israel, the “apple of God’s eye.” They had carried off the northern tribes into captivity, and had since oppressed the people of Judah during the time of the righteous King Hezekiah (Is 36:1).

The people of God must have wondered, “are they really going to get away with this?”

God sends the prophet Nahum to reveal Nineveh’s future: utter desolation. With Jonah, there was a chance to repent. Now the time for repentence is over. God is good and compassionate (Nah 1:7, Jon 4:2), but He will not leave the guilty unpunished (Nah 1:3).

Why would a loving God send such a harsh message? The structure of Nahum’s oracle gives us a clue. The book doesn’t begin with a simple description of the judgment to come; instead, Nahum leads by describing God in the following ways:

God is good—that’s the twist.

Because God is about to display all His wrath and might and jealousy, but the Assyrians have not taken refuge in Him. God is safety to those who fear Him, but danger to those who disregard Him.

And because the Assyrians disregard Him, they cannot be safe.

Nahum is a brutal prophecy against the enemies of God and His people, but Nahum’s name means “comforter.” This oracle comforts God’s people by showing them that He is still in control. He still watches over His own. And even when justice seems completely out of balance, He has a plan to right the scales.

The LORD is slow to anger and great in power,

And the LORD will by no means leave the guilty unpunished. (Na 1:3) 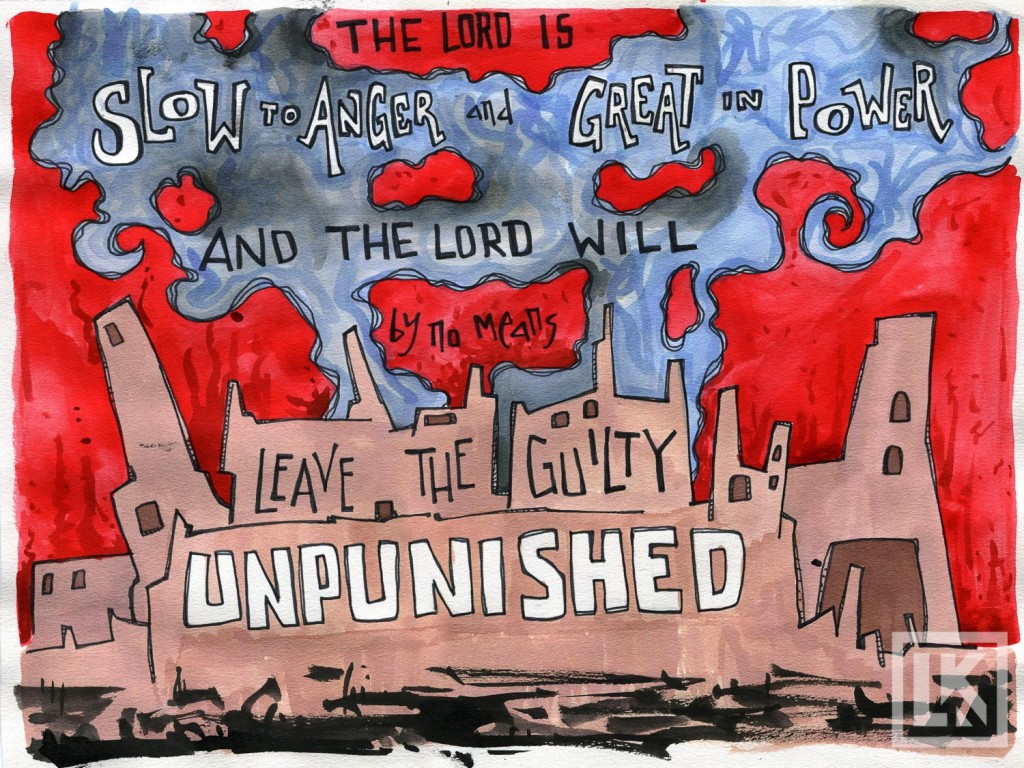 Nahum’s role in the Bible

Nahum is the seventh of the Minor Prophets, the last 12 books of the Old Testament. When God had a message for the people, He spoke through the prophets. His word came in visions, oracles, dreams, parables, and the like. Most of these book were written to the people of Israel and Judah, but Nahum, Obadiah, and Jonah are more concerned with surrounding nations.

We don’t know much about the prophet Nahum. The other books of the Bible don’t mention him, and we aren’t even sure where his town (Elkosh) was located, though it was probably a town in Judah, since the Northern Tribes had been taken into exile by the time Nahum wrote his book.

Nahum was written after the Assyrians sacked the Egyptian city of Thebes, or No-amon (Nah 3:8). It was likely written before the Babylonians took over Nineveh in 612 B.C.

It might help to think of Nahum as a follow-up to the book of Jonah. Both prophets speak God’s word regarding the city of Nineveh. Both warn that the Lord will judge them for their wickedness. But while God extends compassion to Nineveh in Jonah, He only promises to punish and avenge in Nahum.

Nahum is similar to Habakkuk, too. While Nahum foretells the downfall of a world empire, Habakkuk anticipates the empire that takes its place: Babylon.