The Tower of Babel and the Other Gods of the Bible

The first eleven chapters of Genesis form the prologue for the rest of the Bible. In these chapters we find some of the Bible’s most famous stories, like Adam and Eve, Cain and Abel, and Noah’s Ark. This prologue culminates with the united people of earth attempting to build a tower to heaven, only for God to confuse their efforts by distributing different languages across the population.

On the surface, it seems like a simple moral story about where the world’s languages come from. But the Tower of Babel is one of the most vital Bible stories—because the ancient Jews believed that something even bigger was at play than language. If you understand the Tower of Babel, then you gain a huge advantage when reading anything else in the Old Testament.

We’re going to get a high-level overview of the Tower of Babel, both its significance and the shadow it casts over the rest of the Old Testament. Here’s the ground we’re going to cover:

(And if you haven’t checked it out yet, Dr. Michael S. Heiser’s book, The Unseen Realm, is an enlightening resource for exploring this further.) 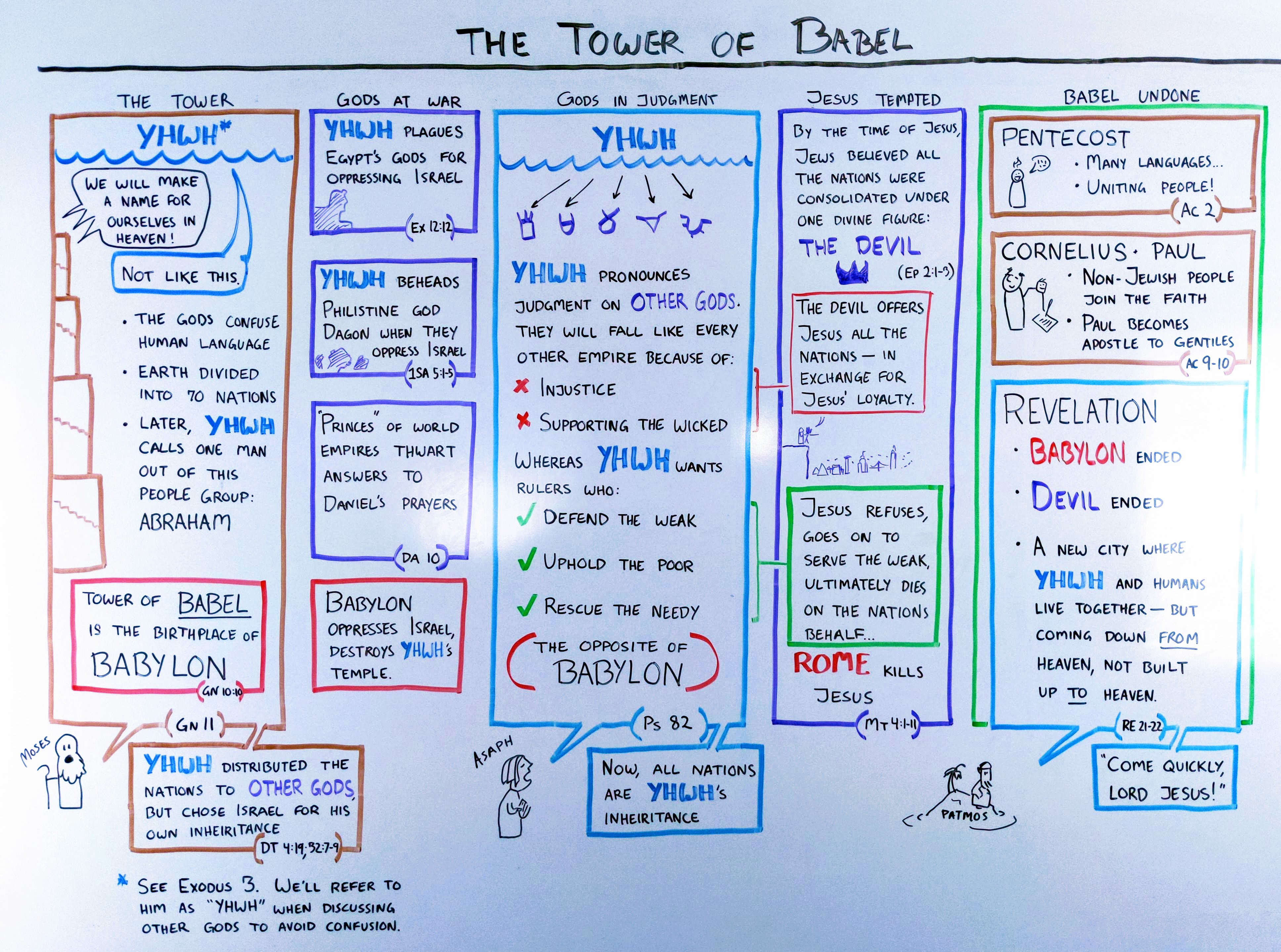 Many languages, many nations

Early in the book of Genesis, we find the humans of the world all speaking with one language. One particularly violent warrior, Nimrod, founds a kingdom, including a city named Babylon (Genesis 10:8–10). If you’re familiar with the story of the Old Testament, then you know that Babylon is the world empire who would eventually sack the Temple of Israel’s God in Jerusalem and carry the Hebrews off into captivity. So any ancient Israelites hearing this story would know right away that this city is bad news.

NOTE: “Babel” is the actual transliteration of the Hebrew word for “Babylon”—while our English Bibles make a distinction between the tower incident and the Chaldean city, the original Hebrew text does not.

The people of Babel want to make a name for themselves, and begin constructing a tower that reaches into the heavens. It’s possible that they were trying to bring the gods down to earth, or that they wanted to ascend to become like gods themselves (Isaiah 14:4, 13–14). Either way, God sees no good coming from humanity working toward this end, and says to the heavenly host:

“If as one people speaking the same language they have begun to do this, then nothing they plan to do will be impossible for them. Come, let us go down and confuse their language so they will not understand each other.” (Genesis 11:6–7, emphasis added)

With this stroke, some 70 nations of the world are divided. (These nations are listed in the previous chapter of Genesis.) However, the most important nation in the Old Testament is nowhere to be found … yet.

Directly after the Tower of Babel incident, God calls a man named Abram (later named Abraham) from the land of the Chaldeans—the same people group that built the Tower of Babel. God tells Abram that his descendants will be given a land, and that through him, all the other nations of the world will be blessed. Abraham becomes the father of Isaac, who becomes the father of Jacob, whose children become the nation of Israel.

This is all taking place at the beginning of a group of books known as the Torah or Pentateuch: the first five books of the Bible. The book of Genesis shows how Israel’s ancestors came to know their God. But later, at the very end of the Torah, we learn how the ancient Israelites believed the other nations got their gods.


Many nations, many gods

In the book of Deuteronomy, the prophet Moses instructs the people of Israel on how to conduct themselves in the land that their God promised their ancestor Abraham. It’s here that Moses mentions that, while Israel has their own God, the other nations have theirs.

Moses tells the Israelites not to worship the sun, moon, the stars, and all the heavenly host like the other nations do. However, he tells the Israelites that Israel’s God allotted these objects of worship to the other nations. All the other nations of the world worship their gods, but Israel’s God specifically made Israel his own portion (Deuteronomy 4:19–20). Later, Moses reminds the people that long beforehand, the Lord divided up the nations. And when he did so, he gave each of the nations their own lands and inheritances—but chose Israel for himself (Deuteronomy 32:7–9)

We have several examples of this mentality showing up in the Old Testament. The Philistine idol Dagon cannot stand before the ark of the covenant (1 Samuel 5:1–5). A “prince of Persia” prevents a divine messenger from delivering an answer to Daniel’s prayers (Daniel 10:12–13).

But the chief example of this is when God rescues Israel from slavery in Egypt. God famously brings ten plagues on the Egyptians, compelling the Pharaoh to release the Hebrews. However, these judgments aren’t just on the oppressive Egyptian humans. The author of Exodus believes that Israel’s God was exacting judgment on all the gods of Egypt, too (Exodus 12:12).


The divine council in Psalm 82

The gods of Egypt oppressed the Israelites. But they weren’t the only gods who developed oppressive empires. Eventually, the Lord Most High says he’s had enough.

The psalmist Asaph envisions a heavenly courtroom (Psalm 82),  wherein Israel’s God chastises the gods of the other nations. God tells the other divine beings that they have been aiding the wicked and unjust people of the world, rather than leading the way Israel’s God wants them to: by protecting and defending the poor and the weak. Because of this, God will bring them all down, and disinherit them of the nations.

At this point, the psalmist believes that not only is Israel God’s portion (which is what Moses said), but all the nations are God’s inheritance.

If we fast-forward to the New Testament, we see a character emerge who has all the nations of the world under his thumb: the devil. This divine being tempts Jesus in the wilderness, eventually offering all the kingdoms of the world to Jesus if Jesus pledges loyalty to him.

The problem is twofold. First, these kingdoms are all (as far as the Jews are concerned) God’s inheritance anyway. Though the devil has rulership over them during Jesus’ time, they are rightfully God’s inheritance. Second, Jesus pledging allegiance to the devil would cede that the way of the other gods was acceptable in the end. Jesus’ Father (the God of Israel) had already voiced his displeasure with the way of the world—accepting the devil’s deal would be the ultimate betrayal.

Instead, Jesus resists the devil’s offer. And he immediately begins doing the work that God expected the other gods to do in Psalm 82: healing the sick and the poor, casting out demons, and announcing that the kingdom of God is at hand.

And while the other gods’ nations acquired might through violence and bloodshed, Jesus sheds his own blood on behalf of the people he came to rule.

After Jesus’ resurrection, the shadow of the Tower of Babel begins to dissolve. Shortly after Jesus’ return to heaven, his disciples are empowered by the Holy Spirit during the festival of Pentecost. Immediately Jesus’ followers begin speaking many languages—but instead of bringing about confusion (like at the Tower), it brings about unity. Thousands are added to the Christian community. Later in the book of Acts, the Holy Spirit comes upon non-Jews as well, which triggers Christ-following communities to spring up all throughout the Roman empire.

While Babel drove the nations apart, Jesus brings them together.

And as far as the New Testament writers are concerned, it gets even better. John the Revelator envisions the powers of both Babylon and the devil crumbling before the risen Jesus. And his letter, the New Testament, and the entire Bible conclude with a reverse Babel. Instead of a city building up from earth to heaven, a city descends from heaven to earth. Instead of making a home for a human king in the sky, God makes a home for himself with us. Instead of an undefeated warrior king ruling the world through military might, the God Who Died rules a new world in peace, justice, and love.