11 Fascinating Facts about the Angel Gabriel 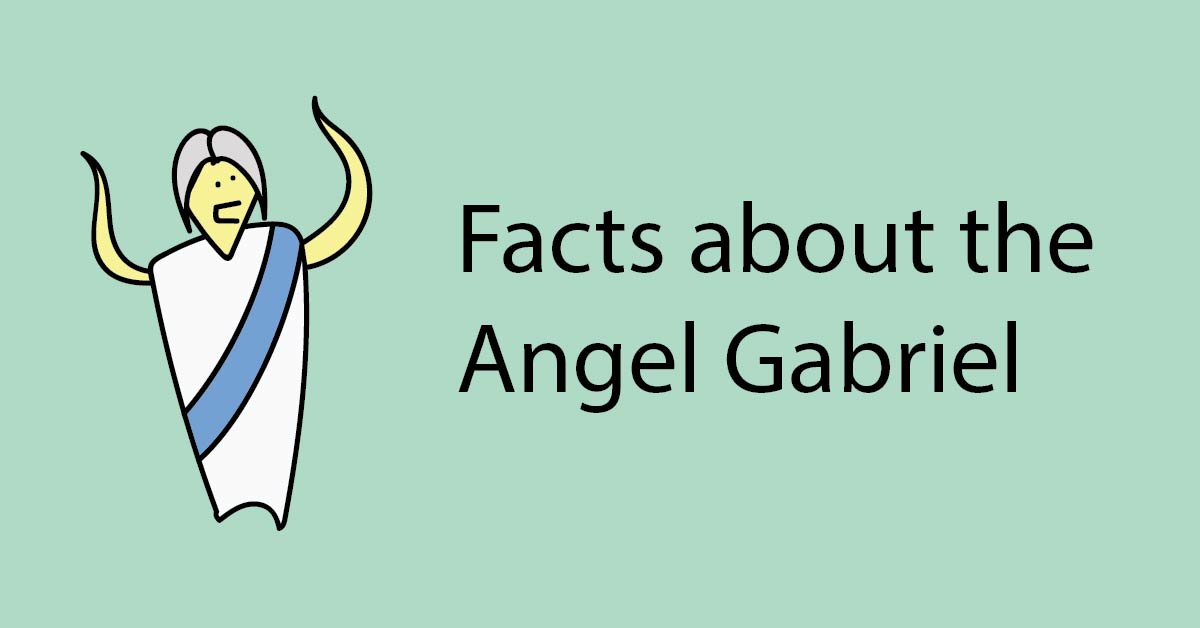 The angel Gabriel may be one of the most well-known characters in the traditional Christmas story, and aside from the Trinity members and the devil, he’s probably the most famous divine being in the Bible.

But how much do we really know about Gabriel? How much of what we “know” is based on the Bible, and how much is based on TV Christmas specials?

I thought it’d be fun to take a closer look at this character.

Heads up: A few years ago I wrote a list of facts about the angel Gabriel for Logos Bible Software. This was back when I worked at Logos. But I’ve made a few more observations since then. =)

1. Gabriel isn’t called an archangel in the Bible

Did you know that every month, 12,000 people Google “archangel Gabriel”?

What’s interesting about this is that the Protestant Bible never once calls Gabriel an archangel. The only named angel specifically called an archangel in the Bible is Michael (Jude 9).

So why does everyone think of Gabriel as an archangel?

Well, a long time ago someone wrote a piece of literature called the book of Enoch. This is, as far as we can tell, a work written between the Old and New Testaments. It was super influential—so influential that the book of Jude even quotes it (Jude 14–15)!

Now, you could make the argument that:

1. The book of Enoch says Gabriel and Michael were archangels.

2. Jude quotes the book of Enoch as legit prophecy, and calls Michael an archangel.

Archangelhood isn’t really a big deal in the grand scheme of Scripture, so it’s probably not a big deal if people call Gabriel an archangel or not. But hey, it’s good to know what the Bible says. ;-)

2. Gabriel is one of two named (good) angels in the Protestant Bible

The Bible mentions many angels—sometimes seers see tens of thousands at a time. But for all the angels in the Bible, only two are explicitly named. Gabriel is the first. The other is Michael.

Granted, there are a few more divine creatures and critters with names in the Bible. But they’re not so clearly on God’s side.

Caveat: This only goes for the Protestant Bible. My Catholic and Orthodox friends can cite Raphael as another biblical angel (from the book of Tobit).

In the eighth chapter of Daniel, the prophet has a vision about a ram and a goat—and a lot of crazy stuff happening with their respective horns. I’ll let you check out the bizarre details yourself.

Suffice it to say Daniel has a hard time understanding this vision. So someone “who looked like a man” comes to explain it to him. This person’s name is Gabriel.

4. Gabriel stands in the presence of God

Gabriel’s second appearance in the Bible is in the book of Luke. He’s the one who announces to Zechariah the priest that he is going to have a son (John the Baptist).

Zechariah is confused by this—more on that later. He asks Gabriel how he can be sure that this is going to happen.

Gabriel responds with a mic drop (and I paraphrase): “I’m Gabriel. I stand in the presence of God and he sent me to tell you this good news.” (Lk1:19)

The Bible mentions some other divine beings who stand in the presence of God. For example, Isaiah sees seraphim, a group of six-winged beings flying around God’s throne in the temple (Is 6:1–2). Ezekiel sees cherubim, a group of four angels with four faces who transport God’s throne (Ezek 10:20). Even an agent called “the satan,” an angelic prosecutor, stands before God on a few occasions (Zec 3:1).

Gabriel speaks with Daniel, the prophet and sage. God sends Gabriel to Daniel in response to Daniel’s prayers (and confusion about those visions).

Gabriel next speaks to Zechariah the priest, to tell him about the coming birth of John the Baptist.

The last person Gabriel speaks with is Mary, the mother of Jesus. He famously announces that even though she is a virgin, she will bear the Son of God.

6. Gabriel’s messages all point to the coming Messiah

Every time Gabriel shows up in Scripture, he makes some mention of Jesus.

The first time he speaks with Daniel, Gabriel explains that one of the horns in Daniel’s vision represents a “fierce-looking king” (Da 8:21–23). Gabriel tells Daniel that this king will destroy many, and take his stand against the Prince of princes (8:25).

Daniel is understandably vexed by this. Later, he prays to God for mercy. Once again, Gabriel is sent to Daniel. This time, Gabriel tells Daniel that the Messiah, the ruler, will be put to death (9:25–26).

Both of these messages point to a conflict between a coming “fierce-looking king” and Messiah—and for a time, it will look like the Messiah is the loser of this conflict.

Fast-forward to the New Testament. Gabriel tells Zechariah that he will have a baby boy in his old age. And this isn’t just any son: this is the one who will “go on before the Lord, in the spirit and power of Elijah […] to make ready a people prepared for the Lord” (Lk 1:17). The “Lord” here is Jesus.

And then of course, there’s the announcement of Jesus’ birth to the virgin Mary.

When Daniel first describes Gabriel, he says that the angel looks like a man (Da 8:15). In fact, when Gabriel shows up afterward in chapter 9, Daniel doesn’t describe Gabriel as an angel—instead he calls Gabriel “the man I had seen in the earlier vision” (9:21).

But he doesn’t seem to just come off as your average dude. When Gabriel shows up, his appearance frightens people.

For example, when Gabriel first approaches Daniel, the seer is terrified (8:17). Zechariah is likewise “startled and gripped with fear” (Lk 1:12).

Now, to be fair, Gabriel did show up unannounced in what was supposed to be an empty temple. So I can imagine that Zechariah may have been less spooked by Gabriel’s looks than he was by Gabriel’s sudden appearance.

Oh, and while we’re talking about Gabriel’s appearance …

8. There’s no record of Gabriel having wings

Just thought I’d throw this one in for fun. While the Bible tells us that Gabriel came to Daniel “in swift flight,” it never mentions wings (Da 9:21).

But we can probably cut da Vinci a break: the Bible doesn’t say that he doesn’t have wings either. ;-)

Gabriel delivers two messages in the book of Luke: one to Zechariah and the other to Mary. Both concern miraculous births.

An interesting thing that Luke tells us is that Gabriel can tell whether or not the people he’s talking to believe his message.

For example, Zechariah asks Gabriel, “How can I be sure you’re telling me the truth? I mean, Elizabeth and I are pretty old.” And Gabriel replies, “Look, I’m Gabriel. God sent this message, and since you didn’t believe me, you can stay mute for the next nine months.” (Lk 1:18–20 … paraphrasing, obviously.)

But later on Mary asks Gabriel the same kind of question: “How can I have a son? I’m a virgin!” But Mary gets an explanation, and no silencing effect.

10. Gabriel comes in response to prayers

The Bible preserves four conversations between Gabriel and people: two with Daniel, one with Zechariah, and one with Mary. Half of these conversations begin with God sending Gabriel in response to a prayer.

In Daniel chapter 9, Daniel makes a long, heartfelt prayer to God on behalf of Jerusalem, the temple, and the people of Israel. This is a prayer confessing that Israel has sinned and does not deserve God’s favor—yet Daniel throws himself on God’s mercy to ask for his favor anyway.

As soon as Daniel begins praying, Gabriel is sent to Daniel (Da 9:23).

And when Gabriel appears to Zechariah, he opens by saying that God has heard his prayer for a son (Lk 1:13).

11. Gabriel names the two greatest humans to ever live

When it comes to baby-naming, Gabriel gets the highest honor.

When Gabriel tells Mary that she will bear a son, he tells her that his name is to be Jesus (Lk 1:31). Being that Jesus is the Son of God, the Messiah, and the exact representation of God’s nature (Heb 1:3), it’s safe to say he’s the greatest human to walk the earth.

But that’s not the only baby Gabriel names!

When Gabriel startles Zechariah in the temple, he tells the priest to name his son John (Lk 1:13). In Matthew’s Gospel, Jesus states that among the sons of women, nobody is greater than John the Baptist—although the very least in the kingdom of God would be greater than John (Mt 11:11).