What’s a covenant? A quick definition and overview 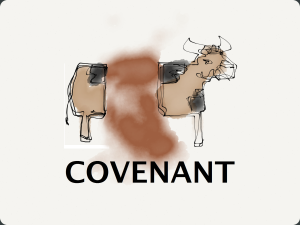 “Covenant” is one of those words that just keeps coming up when you read the Bible—and certainly when you study it. When we hear of “covenant” today, it sounds like lofty legalese for “contract,” or “agreement.”

But covenant is a weighty theme that dominates Scripture: it’s good to get an idea of what it means in the Bible.

What is a covenant?

When the Bible mentions a covenant, it’s referring to a strong, solemn agreement between two parties. However, biblical covenants are very different from the kinds of agreements we make nowadays:

When the Bible speaks of covenant, it’s usually more than just an alliance, and certainly more than a transaction of goods and services: it’s a bond that God Himself holds people to.

2 main kinds of covenant in the Bible

There are two main kinds of covenants in the Bible:

Where to read about covenants

Want to learn more about covenants? I recommend starting with the Pentateuch, which describes God’s covenants with Abraham and the Jewish people.

Here’s a list of books of the Bible in which covenant plays an especially important role: