David’s mighty men (and the stories behind them) [infographic] 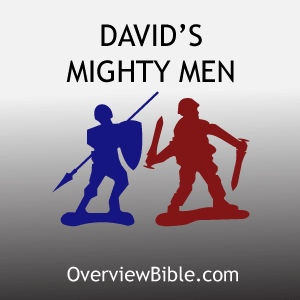 You’ve probably heard about David’s mighty men (if not, you’ll be ahead of the curve in a minute). David was a skilled soldier and leader, but he wasn’t alone. He had a band of very loyal, very powerful heroes who stood by him.

Seriously: ever hear of Legolas from The Lord of the Rings? He killed 42 orcs in one battle, and I think everyone agrees that he’s pretty hardcore. Well, you’re about to meet someone who took out 800 bad guys at once.

You can read the lists of these mighty men beginning at 2 Samuel 23:8 and 1 Chronicles 11:10. You’ll notice a few inconsistencies: some people are called by different names and some are included in one list and omitted from another.

I first learned about David’s mighty men when I was studying David’s life in First and Second Samuel. That’s where I read about Ashael’s legendary running speed (2 Sa 2:18) and Jonathan’s 12-fingered giant (2 Sa 21:20–21). You might like to study these books, too.