15 Biblical Facts about Heaven and the City of God 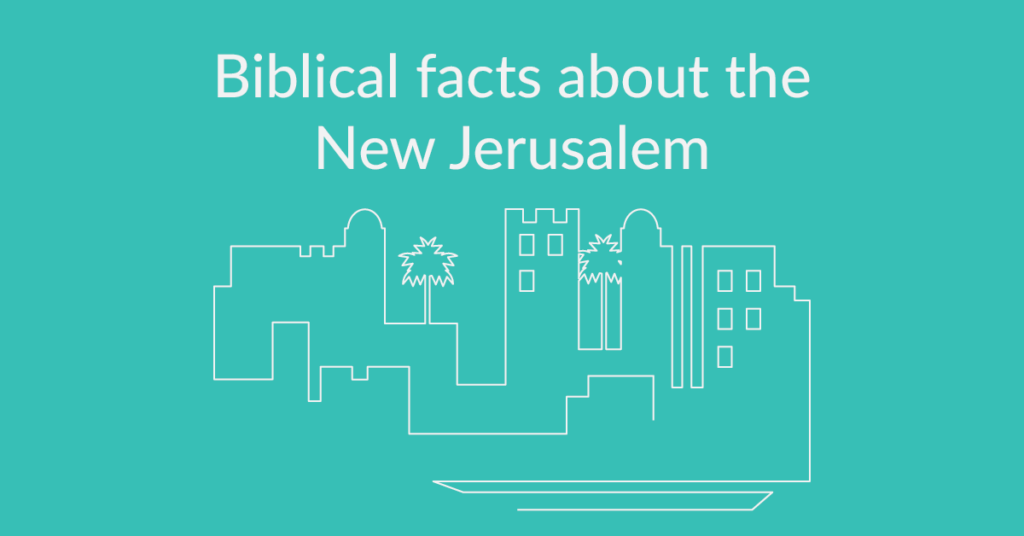 We’re used to hearing about heaven as a happy place where we go when we die. And most people hear about heaven in a few contexts:

As a kid, it sounded like a boring place (endless choir practice?), but it sure beat the alternative. A few Sunday school lessons, sermon-opening jokes, and a Ray Boltz song got the idea in my head that heaven was a place with streets of gold. When I asked about what heaven was like, I was directed to the last two chapters of Revelation.

But it didn’t take long for me to catch this phrase at the beginning of Revelation 21: “a new heaven and a new earth.” And then John the Revelator describes a city called the “New Jerusalem.”

Kid Jeffrey: “Wait. What? I thought we were talking about heaven.”

Heaven vs. the New Jerusalem

Turns out that when people describe “heaven” in Christian culture today, they’re usually referring to the New Jerusalem that John sees at the end of Revelation.

Why? Why would the New Jerusalem get called “heaven”?

It’s probably because we’re so used to hearing that people “go to heaven” when they die. Some of this may come from some of Paul’s comments on what he thinks will happen to him when he dies. Specifically, Paul believes that when he dies, he will be with the Lord (Php 1:23).

And as far as the New Testament narratives tell us, Jesus is currently at the right hand of the Father in heaven.

I don’t think that’s necessarily the case, but for better or for worse, “heaven” and “the New Jerusalem” get rolled into one concept in people’s minds: the good part of the afterlife.

But the New Jerusalem isn’t just a happy place for the deceased to kick back in for all eternity: it’s actually the culmination of a theme that runs through the whole of Scripture, from the very beginning to the very end: the construction of the city of God.

My friends at Zondervan released a pretty cool infographic describing exactly how this theme is developed through the Bible:

^ That’s based on an article in the NIV Zondervan Study Bible by T. D. Alexander on “The City of God.” And in case you wanted an affiliate link to pick up a copy yourself, here ya go.

Let’s dig into a few ways that John describes this city.

But first, let’s get one thing out of the way: I’m not 100% sure that John was trying to give us a literal physical description of what eternity with God will be like. It’s possible that John’s vision of the New Jerusalem was symbolic—that is, hints at what eternal life will be like, rather than a hard-and-fast blueprint of what’s to come. I don’t know—the only way to find out is for us to argue about it in the comments.

What I do know is that in Revelation chapters 21 and 22, John sees some really cool stuff. Here’s a list of things John tells us about the New Jerusalem:

The city of Jerusalem was destroyed in 70 A.D. by Titus of Rome, and the book of Revelation was written after this took place. This means that, for John, any Jerusalem remotely as glorious as the city he saw would have to be a “new” Jerusalem.

The newness not only refers to the fact that the old Jerusalem was destroyed, but that the entire order of the world is being remade in John’s vision. The old heaven and earth pass away, and God ushers in a new era of peace and communion with God and humans—much like we aw way back in the Garden of Eden.

“Holy” means “set apart” for a special purpose. This city is different from any city John has ever seen.

But what’s so different about it? We’ll take a closer look at why it’s so holy in a little bit.

This New Jerusalem doesn’t just appear: it’s brought to earth from the abode of God.

This is where maybe we get “heaven” right: if this city is being prepared, and if it indeed comes to earth from heaven, then it’s possible that the New Jerusalem is under construction in heaven now. That would mean that at least part of heaven may resemble John’s vision of the New Jerusalem … but that’s a bit speculative for my taste.

The night Jesus was betrayed, he told his disciples, including John, that he was going to “prepare a place” for them (John 14:2–3). This city emerges from heaven prepared.

5. It is God’s dwelling place among humans

Here’s where we start to really see what’s special about this city. A voice from God’s throne proclaims:

“Look! God’s dwelling place is now among the people, and he will dwell with them. They will be his people, and God himself will be with them and be their God.”

To us modern folk, this sounds like a nice message about how God is moving into the neighborhood. But to the ancients, this was a big deal. In those days, humans would build places where gods could dwell among humans. These places were called “temples.”

6. There will be no more death, mourning, or pain

7. It is for the victorious

God tells John that “those who are victorious will inherit all this, and I will be their God and they will be my children.”

But who are the victorious? The visions in Revelation seem to indicate that those who remain faithful to Jesus are victorious, or those who “overcome” in the second and third chapters of the same book.

8. It is the bride of Christ

In John’s vision, the New Jerusalem is prepared specifically for Jesus Christ.

We often associate “the bride of Christ” with the Christian church. But in John’s vision, the New Jerusalem is described as the bride of the Lamb.

This makes sense: the city of God is prepared as the capital of King Jesus’s kingdom—not just “a big, big yard where we can play football.”

9. Shines with the glory of God

John says the city shines like a brilliant jewel. Moreover, because God the Father and the Lamb dwell in the city, the sun and moon are pretty much pointless—there’s no night in this city.

This city is the ultimate version of the Jewish temple. Get a load of this:

The whole city is a study of twelves:

This sounds amazing on its own. But let’s take a step back and think about this from John’s first-century Jewish perspective (if we can).

First of all, look at all these twelves. John’s not shy about this being a direct reference to the twelve-tribed nation of Israel. And that really shouldn’t surprise us. Jesus is the son of David, the Messiah from the line of Israel’s greatest king.

Now, look at the dimensions of the city itself. It’s a perfect cube of pure gold. To us, that sounds like a ritzy place to be. But to the ancient Jews, this would have been a direct reference to the holiest room in their temple: a room called the Holy of Holies. This is where the ark of the covenant rested, and where the high priest of Israel would atone for the sins of Israel once per year. When Solomon built this room, it was also perfect cube (1 Kings 6:19–20).

You can see how this would be exciting for a first-century Jew to see. Jesus was coming, and bringing with him a temple far, far greater than anything Solomon, Herod, or Moses could have imagined!

Thats’ because Jesus and God are already dwelling openly in the city. There’s no need for one sacred room in which they can interact with humans—the whole city is sacred.

12. The New Jerusalem leads the other nations

This surprised me when I first read it, because I’d always assumed that everyone just stayed inside the city. After all, if the city is “heaven,” would you ever want to leave it?

This is yet another reference to the Jewish temple.

A good deal of the Law of Moses deals with laws regarding purity—that is, how to live in a way that allows the Israelites to stay in the presence of God without being completely consumed by the intensity of his glory. As a rule, the closer you came to the living God, the purer you had to be.

Priests had to maintain high levels of purity, as they spent the most time in God’s dwelling place.

The people didn’t need to be as pure, but they still needed to abstain from certain behaviors.

14. There is a river of life flowing through the street

John writes in his gospel that Jesus told the Samaritan woman at the well:

Perhaps John recalled this when he saw in his vision a river of the water of life flowing from the throne of God and the Lamb out into the street of the city.

In the Garden of Eden, God planted a tree of life whose fruit, when eaten, could sustain life forever. But Adam and Eve disobeyed God, and were driven away from the tree of life (Gen 3:22–24).

However, John sees a vision of Eden restored in the New Jerusalem. The tree of life is back, yielding fruit month in and month out.