The least popular book of the Bible (it’s not Leviticus) 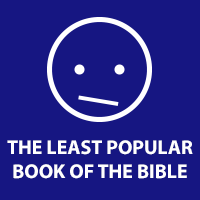 I recently took a look at the 10 most popular books of the Bible—another super hat tip to Jonathan at BibleGateway.com for that data. That gave me something else to think about: what’s the least popular book of the Bible?

(For the purposes of this post, “least popular” =  “least-read book of the Bible on BibleGateway.com”.)

Let’s just get this out of the way: the least popular book of the Bible is not Leviticus. That’s a popular guess, and I understand why (more on that later).

My own guess would have been Second Chronicles (on account of how boring it is). Nope. I was totally wrong on that, too.

Turns out the least-read book of the Bible is about three quarters of the way through your Bible. I imagine most of you have already skimmed to find what it is, but for those of you who are still playing the guessing game, here are a few hints:

Obadiah is the least popular book of the Bible

When I learned this, I was both surprised and not-so-surprised. I was surprised because (as I stated before) I figured it would be one of those books more well-known for being boring or stuffy.

At the same time, I wasn’t surprised. Plenty of Christians have never even heard of Obadiah. Even Jesus, who loved quoting Old Testament books, doesn’t ever give a nod to Obadiah. 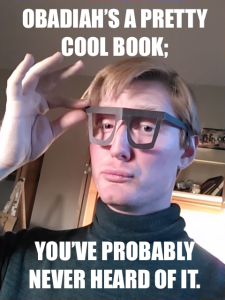 It doesn’t get more hipster than this, folks.

He’s pretty obscure. So obscure, I grabbed* the nearest pair of nonprescription specs just to make this meme.

And for those of you wondering why it’s not Leviticus, consider a few things:

So Leviticus is getting plenty of attention, but not Obadiah. In fact, Obadiah doesn’t even get a lot of attention in some of my favorite Bible reference books.

Let’s explore why Obadiah gets no love.

*And by “grabbed,” I mean, “pulled out my craft kit and forged.”

Why is Obadiah the least popular book of the Bible?

I think there are a lot of understandable reasons Obadiah doesn’t get much attention, and I’d like to explore them with you. Before we get into this, you should know that I happen to really like the book. It was a fun one to overview, and although it’s not a super popular piece of Scripture, it’s Scripture nonetheless.

It’s the fourth-shortest book of the Bible (go ahead, check out all the shortest books), and it might not even take up a whole page in your print Bible. It’s only one chapter long, which means there just isn’t as much to draw from.

With other books in the same prophetic genre, you have plenty of material, and a higher chance of content that really resonates with people. By “resonates,” I mean, “seems like the kind of stuff you should use as a life verse.”

For example, Jeremiah covers almost all the content Obadiah does. But he also covers a lot more, including verses about potters and clay, or that one about God having plans for Israel’s future (Je 29:11).

Plus, Obadiah is so brief that if you’ll probably miss it if you’re not looking for it (like all those clever Easter eggs in the Pixar movies).

#2 Obadiah’s context is a little messy

God is pretty much telling off the little Middle-Eastern nation of Edom. When the kingdom of Judah was attacked, the Edomites didn’t bother to help them out. In fact, they helped Judah’s enemies instead (Ob 8:10).

Remember Jacob and Esau, way back in Genesis? Long story short, Jacob schemed Esau out of their father’s blessing. Esau and Jacob eventually kissed (Gn 33:4) and made up, and then went on to have great big families of their own.

And why is Edom in such big trouble?

As far as God is concerned, Edom should have shown more support of their kin. After all, God had commanded that Israel treat Edom as family (Dt 23:7–8).

Is there more to this story?

Yup. It’s not like these countries had been pals and Edom just said, “You know what, Judah? We’re gonna sit this one out for now.” They had a colorful, not-too-friendly history.

Edom was a jerk to Israel when they were wandering in the wilderness(Num 20:20–21). Later, Israel pretty much took over Edom and made them a vassal territory. You can read the whole story here. Suffice it to say these nations have had their squabbles.

And then God comes in and takes Judah’s side, which leads to the next reason people might not like reading Obadiah.

Judah is part of God’s special people: a people called by His name. Edom’s behavior is not OK with God, and He gets mad.

And the things God says when He’s angry just don’t give us the warm fuzzies that some of the Psalms or lines from Jesus do. For example:

Or how about this?

“Will I not on that day,” declares the LORD, “destroy wise men from Edom and understanding from the mountain of Esau? Then your mighty men will be dismayed, O Teman, so that everyone may be cut off from the mountain of Esau by slaughter. Because of violence to your brother Jacob, you will be covered with shame, and you will be cut off forever.” (Ob 8–10)

I believe God is just in His judgment and consistent in His character, but I understand why pastors might not bring up Obadiah in their sermons very often. It would take a good bit of time to explain why a loving God would say these things.

It’s one of the Minor Prophets tucked at the back of the Old Testament, and the only really well-known story from that collection is Jonah.

That, or your pastor just doesn’t bring them up because they’re tough to pronounce.

The books of Matthew, Romans, and Psalms have plenty of material that can be readily applied to our daily lives. Beloved lines like:

But Obadiah chiefly dwells on a message of coming judgment for a specific country (Edom) because of their specific actions (siding against Judah) at a specific time (probably Nebuchadnezzar’s siege of Jerusalem). It’s not as easy to pull personal takeaways from Obadiah in devotionals and sermons.

But there are plenty of good reasons to read Obadiah anyway

Sure, there are a lot of factors at play that make Obadiah a lot less popular than other books of the Bible. Still: it’s the inspired word of God, and I can think of a few reasons I enjoy reading and studying it.

#1 God looks out for His own

God disciplines His people, but He still comes to their defense. Consider this: the book of Obadiah is written about the Babylonian conquest of Jerusalem. That’s an event that God brought about for Judah’s punishment!

Even when He’s punishing them, God has Judah’s back. This is the God we serve: a God who is steadfast and faithful to His promises and His people.

#2 God is bringing about His kingdom on earth

The language of Obadiah isn’t just God going off on a tirade against Edom. This isn’t the Lord saying “GOD SMASH” like a green Marvel Avenger**. This is kingdom language.

The day of the Lord draws near on all the nations (Ob 15). The book of Obadiah ends with a statement: “the kingdom will be the Lord’s” (Ob 21). God is bringing about a new kingdom—a righteous, holy kingdom.

If you’ve made it this far in this blog post, you’ve covered more than double the length of Obadiah. It’s a three-minute read, tops.

Why not give it a look?

#4–9 Prof. David Murray has even more reasons to enjoy Obadiah

You can check out David Murray’s reasons to study the least popular book of the Bible here.

You should check it out.

And if you really like it, maybe we can all get together and be Old Testament hipster Christians together. We could meet in an underground coffee shop, listen to bands that totally don’t sound the same, talk about tattoos, and read passages from Obadiah.

Plus, if liking Obadiah ever becomes mainstream, we’ll all be able to say we liked it before it was cool. Then we can totally wear these T-shirts. 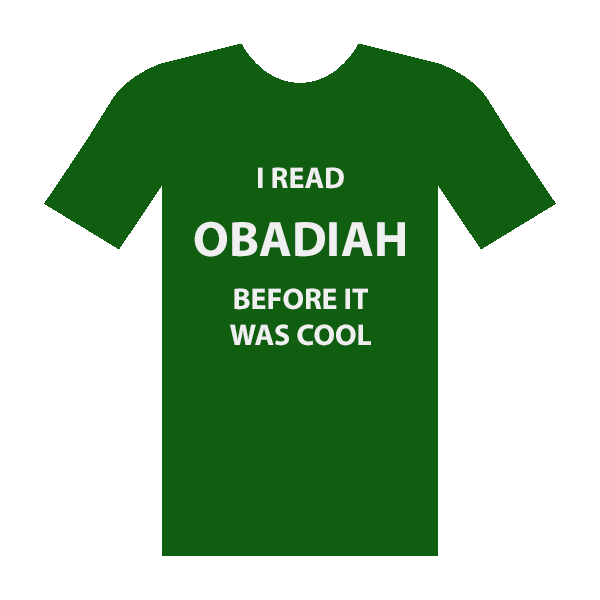 I spend most of my spare time working on Bible-study content like this, and I’d love to keep you in the loop. How about joining my inner circle and staying in the know about these kinds of things?