Philemon: how to accept a runaway slave as a brother

Philemon (fi-LAY-moan) is a good guy. He loves Jesus and the other believers (Phm 5). He as refreshed the hearts of many saints (Phm 7). He’s a church leader in the Colossae area (Phlm 2, Col 4:17). Paul even considers him a beloved brother and a fellow worker (Phm 1).

But he’s about to find himself in a very awkward situation.

Philemon owned a slave, Onesimus (oh-NAY-see-muss). Onesimus had run away from Philemon, and somehow met Paul in his travels. Paul shared the gospel with him, and Onesimus had been saved. Onesimus then stayed with Paul and assisted him while he was in prison (Phm 13).

But Paul sends the runaway slave back to his old master.

Onesimus is going to show up on Philemon’s doorstep with a note from Paul. This message urges him to do something unheard-of: forgive Onesimus and accept him as a brother, not a slave.

“For perhaps he was for this reason separated from you for a while, that you would have him back forever,  no longer as a slave, but more than a slave, a beloved brother, especially to me, but how much more to you, both in the flesh and in the Lord.” (Phm 15–16) 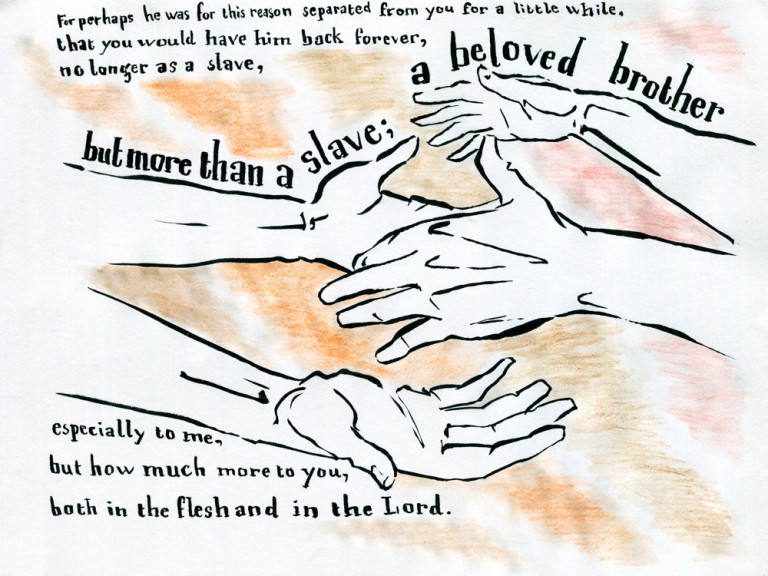 See Bible verse art for the rest of the books of the Bible.

Philemon’s role in the Bible

Philemon is a hybrid. The main thrust of the letter is to Philemon, an individual church leader, but the letter is also addressed to Apphia, Archippus, and the church in Philemon’s house. The epistle is clearly not a private note to Philemon: Paul is publicly addressing the matter.

There’s a good chance that Onesimus delivered both this letter and the letter to the Colossians in the same trip. In that letter, Paul says that in Christ, there is no distinction between “Greek and Jew, circumcised and uncircumcised, barbarian, Scythian, slave and freeman, but Christ is all, and in all” (Col 3:11). The book of Philemon gives the Colossians (and us!) a tangible example of what that means.

Speaking of tangible examples, you might read Philemon as a case study of how Paul’s teachings played out in real life1:

This book has been cited through the centuries as a biblical argument against slavery. Paul does not make any direct attacks on the notion of slavery, but he does hold Philemon to a standard higher than that of the surrounding culture. Punishment for runaways was severe, but Paul told Philemon not only to withhold punishment, but to embrace Onesimus as an equal. And on top of that, Paul is willing to absorb whatever this might cost Philemon (Phlm 18).

And here’s another important aspect of Philemon: we see the early church handling ambiguous situations with complete love and deference:

It’s a marvelous example of how church leaders and members can approach difficult issues.

Philemon isn’t the shortest book of the Bible (that’s Third John), but it is only one chapter long (335 words).

1 Special thanks to scholar and friend Greg Monette for fleshing out this concept with me.