Poetry and Wisdom Books of the Bible: The Beginner’s Guide

Six books in the Christian Bible are known as books of poetry: Job, Psalms, Proverbs, Ecclesiastes, Song of Songs, and Lamentations. These books are almost entirely made up of poems, songs, and wise sayings that the ancient Jews (and the Christians who followed) used to make wise decisions and worship God.

Five of these books are clustered in the middle of the Old Testament. The books of poetry come right after a long run of books that told the story of how the ancient Israelites were exiled from their promised land, and they’re right before the books of prophecy. (Lamentations is the only exception—this little songbook is snuggled up next to Jeremiah in the prophecy section.)

This is a quick beginner’s guide to the books of poetry in the Bible, and here’s what we’re going to cover:

(And if you want a fuller understanding of these books and how they fit into the Bible as a whole, you should check out my book, The Beginner’s Guide to the Bible.)

What kind of poetry is in the Bible?

Heads-up: you will not find “roses are red”–type verse in these parts of the Bible. These six books are written in ancient Hebrew, and the poetry looks a lot more like the poetry of other ancient near-eastern cultures.

When English readers learn about poetry, we’re often introduced to the concepts of rhythm and rhyme. It’s the art of matching sounds of words together. The ancient Hebrews did something similar, but instead of crafting lines of similar sounds, their lines are linked by similar concepts. Bible scholars call this parallelism, and it’s the most important element of Hebrew poetry that you need to know about.

The authors of the Bible use several types of parallelism, but two high-level types dominate the pages of Scripture.

It’s common for biblical poets to craft two or more lines that share the same thought. Sometimes the second line restates the first, such as David‘s cry for help at the beginning of the Psalms:

And sometimes the second line builds upon or intensifies the first. A good example of this is how the main speaker in the book of Ecclesiastes describes the repetitive cycle of the universe, particularly how not only is the ocean ever full, but that the rivers never empty:

All streams flow into the sea,
yet the sea is never full.
To the place the streams come from,
there they return again.
(Ec 1:7)

This type of parallelism can come in more than two lines. For example, the poetry in the book of Job begins with Job (who is in a really, really bad situation) curses the day he was born. He lets loose a series of triple-line curses, including:

May gloom and utter darkness claim it once more;
may a cloud settle over it;
may blackness overwhelm it.
(Job 3:5)

You’ll encounter this throughout not only the six books of poetry, but in other parts of Scripture as well.

Sometimes poets choose to put opposing thoughts side by side to show make their point. These thoughts don’t necessarily voice opposing ideas—usually they’re describing two sides of the same principle.

The prologue to the book of Proverbs gives us a classic example of one thought being expressed by contrasting two opposing outcomes:

The fear of the LORD is the beginning of knowledge,
but fools despise wisdom and instruction.
(Pr 1:7)

These contrasts can occur on a larger scale than a single verse. For example, the beginning of Psalms presents the reader with two sides of the same coin. Blessings await those who delight in the Torah:

Blessed is the one
who does not walk in step with the wicked
or stand in the way that sinners take
or sit in the company of mockers,

but whose delight is in the law of the LORD,
and who meditates on his law day and night.

That person is like a tree planted by streams of water,
which yields its fruit in season
and whose leaf does not wither—
whatever they do prospers.
(Ps 1:1–3, emphasis added.)

Those who follow God’s laws are compared to a healthy, thriving, fruit-giving tree. But those who oppose God’s ways get the opposite treatment—the psalmist compares them to the worthless part of a plant that’s left to blow away in the wind:

Not so the wicked!
They are like chaff
that the wind blows away.
Therefore the wicked will not stand in the judgment,
nor sinners in the assembly of the righteous.
(Ps 1:4–5)

Then the author summarizes all this in one punchy two-liner:

Where are the books of poetry in the Bible?

Christians put five of these books of poetry in the middle of the Old Testament: right after the books of “history” (Joshua–Esther) and before the books of “prophecy” (Isaiah–Malachi). 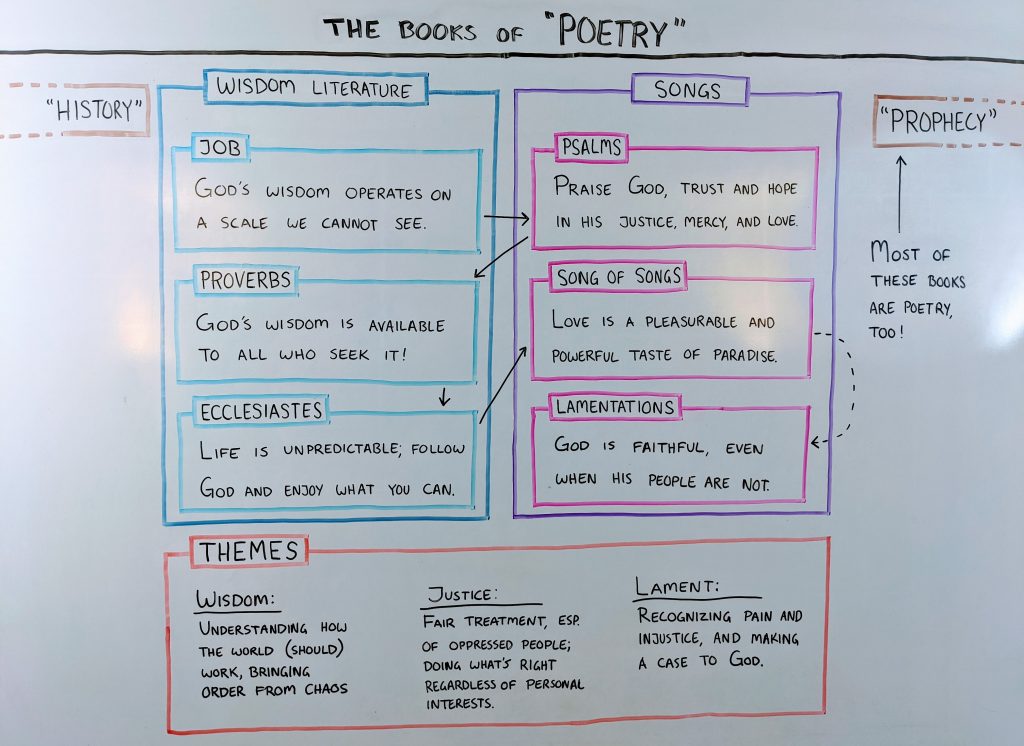 However, this is not how these books were arranged during the time of Jesus, Peter, and Paul.

The ancient Jews put the books of our Old Testament (which they called the Scriptures) into three general groups:

There was no “poetry” section—because poetry is everywhere in the Old Testament. In fact, the poetry-heavy books in the Prophets and Writings account for more content in the Bible than the entire New Testament.

Christians rearranged the books of the Old Testament, putting the story of Israel first, and the prophetic discourses (which are mostly poetry, too) last. But some of these books didn’t fit in either category, so we got a new section: “books of poetry.”

In case you’re curious, all six of these books were considered part of the Writings section.


Books of wisdom in the Bible (Job, Proverbs, Ecclesiastes)

These three books help followers of God think about how the world works, how it should work, and how to deal with the difference between the two. The most celebrated act of wisdom in the Bible is God’s creation of heaven and earth: the God of Israel brings a complex, beautiful world out of cosmic chaos. These books invite the reader to participate in God’s wisdom by bringing justice, mercy, and insight to the world around us.

Job begins in tragedy. It’s a famous Bible story about an innocent man who loses everything. Job makes his case to God, demanding an explanation for the hardship he’s experiencing. God responds by showing Job just how big and complex the world is—and the kind of wisdom it takes to create and sustain such a world. Job (like the reader) concedes that God’s wisdom operates at a scale that sometimes we humans just can’t see.

Proverbs is a collection of wise sayings from the ancient near east, many of which are associated with the wise King Solomon. This book invites the reader to gain more and more wisdom, bringing more of our decisions and actions in alignment with God’s good order for the universe.

Ecclesiastes explores the unpredictability of life: we have an idea of how the world should work, but it rarely goes that way. And no matter how wise you are, or how hard you work, or how pious your faith, you don’t have any guarantees. The book encourages readers to be loyal to God and enjoy the simple things in life—because you really don’t know what’s going to happen tomorrow.


Books of song in the Bible (Psalms, Song of Songs, Lamentations)

The other three books in this section are collections of poems, several of which were probably accompanied by music. Some of these songs are written as prayers to be sung to God, some are written to be sung to other people. There are at least 185 songs in the Bible—and most of them are found in these books.

The book of Psalms is a five-volume collection of poems that the Jews used to worship and understand God. It begins with two promises: blessings for those who delight in the Torah (which also has five parts), and a future Messianic King who will restore Jerusalem and rule the nations in peace and justice. The book calls readers to praise the Lord, and trust in his justice, mercy, and love.

The Song of Songs, which is associated with Solomon, is a romance poem that paints a picture of paradise found in human love. This little book portrays love as an intense and powerful thing, dangerous and beautiful.

The little book of Lamentations is a collection of five dirges, each of which mourns the fall of Jerusalem. It expresses anguish and sadness, but also hope that God will keep his promises, even when humans don’t prove to be so dependable.