TaNaKh: The 24 Books of the Hebrew Bible [Whiteboard Bible study]

To Christians, the Bible is sacred. It’s divided into two big sections: the Old Testament and the New Testament.

And a good deal of Bible geeks know that the Old Testament books are sacred to the Jewish faith, too. In fact, when Peter, Paul, and Jesus talk about “Scripture” in the New Testament, they’re referring to the books of the Old Testament—most of which had been considered sacred for a while.

But since there was no “New Testament,” (and there still isn’t in Judaism today), nobody called it the “Old Testament.” Instead, through the ages, the Rabbis have called this group of texts the Tanakh.

But there’s a twist: although the text of the Tanakh is pretty much the same as the Old Testament, the books are in a different order. The order of these books is fascinating (and quite artful).

I thought you might enjoy seeing how the Tanakh arranges these books, so I made a new video showing how they all fit together. Enjoy! 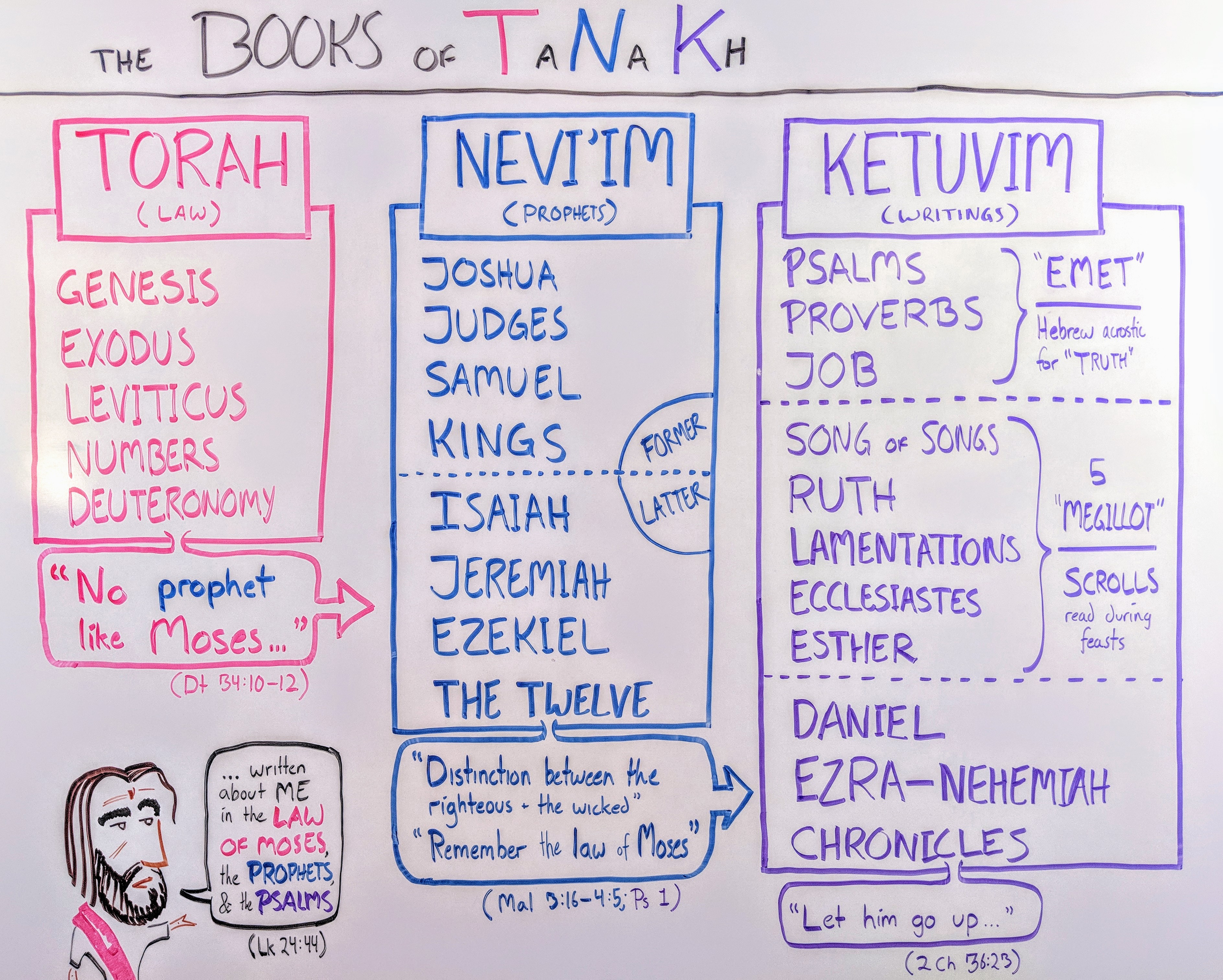 And in case you wanted to copy-paste this goodness …

The 24 books of the Tanakh, in order

These are the books of teaching, the main character of which is Moses. In these books, God chooses Israel to be his special people, and he lays out his expectations for them.

This section ends with the scribes commenting that no prophet like Moses has come along since his time. (Which isn’t quite true anymore, if you ask Christians!) This implies that there were more prophets—which is covered in the next section of the Tanakh.

This is where we see God’s covenant relationship with Israel play out. (Spoiler alert: it doesn’t go so well.) God sends messengers to Israel to warn them of the consequences of breaking God’s laws, but the people, for the most part, ignore them.

The Prophets end with a note that looks back on the Torah and anticipates the writings. In the book of Malachi (which likely means, “My Messenger”), God tells the people that they will once again see the distinction between the righteous and the wicked, and urges the people to remember the law that Moses gave in the Torah.

And the Writings pick up where the Prophets left off, describing how blessed the person who remembers the Law is, and how those who forsake the law eventually come to ruin.

These works of wisdom, poetry, and narrative are arranged to help readers navigate the world in light of God’s laws. They helped ancient Jews make decisions, worship God, remember their history, and look forward to a future when the long-awaited Messiah would save them.