Confession: I’ve always struggled with the timeline of Acts. 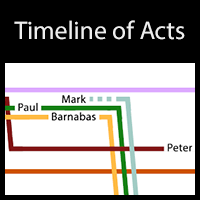 It’s all the moving around. Most Bible narratives take place in one corner of the Near East. But in Acts, several major characters loop-de-loop their way around the Roman empire.

The first few times I read Acts, all the new city and province names just blurred together in my mind, and that made it even harder to follow the story.

But a big-picture framework makes it easier to deal with the details. So here’s a timeline of Acts with the main things we need to know:

This is NOT an in-depth look at all the towns and ports Paul visited. You can find that in the back of pretty much any Bible. This is just about getting the gist of the story and seeing how the characters interact. ;-)

Here you go: a timeline of Acts

More info about this timeline of Acts

It’s easy to follow Moses across the wilderness. It’s tougher to keep track of several major characters as they walk and sail and teleport (Ac 8:39–40) their way around the Roman empire.

Then I remembered how Randall Munroe at xkcd visualized movie narratives. If a system can work for a story like The Lord of the Rings, it’s  probably up for the task of Acts.

This doesn’t cover every character. You’ll notice that John doesn’t have a line, nor the faithful Luke, nor the prophet Agabus. Here’s why:

This isn’t to scale. Luke hits the high points of the early church’s spread, which means there are often many years between one sentence and the next. This timeline would be way too long if everything were scaled.