The Bible is full of weird facts. Some are confusing, others hilarious.

As I was reading the account of Solomon building the temple designed by his father, David (1 Ki 4–9), I did a double-take. An odd sentence caused me to jolt to a stop and read again.

Now this is the account of the forced labor which King Solomon levied to build the house of the Lord. (1 Ki 9:15) 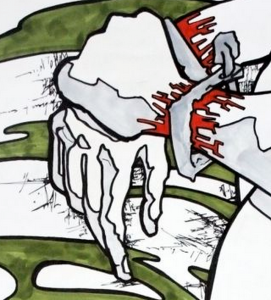 This seems like a paradox. God filled the temple when it was complete (1 Ki 8:10–11) and consecrated it (1 Ki 9:3). From that, we could infer that the temple was pleasing to God. By extension, is slavery, too? Does the end justify the means?

That can’t be right.

I reread it several times, and looked up the Hebrew word to make sure I had it right. The Complete Word Study Dictionary: Old Testament defines the Hebrew word for “forced labor” as follows:

A masculine noun designating forced labor or service, tribute. It refers to labor forced on someone or service demanded, usually by the state; usually overseen by a foreman or task-master.1

The slave labor is mentioned earlier in the book, when Solomon assembles his workers:

That’s almost 100 times the population of my hometown.

Where these slaves came from

Of the slaves, the text tells us they were not Israelites, but captives from nations that Israel had previously fought:

What happened to these slaves next?

When Solomon turns from God in chapter 11, God warns him that he will tear the kingdom out of the hands of his son, Rehoboam (1 Ki 11:12). The construct of slavery may have been at the root of the kingdom dividing under Rehoboam’s rule.

In chapter 12, a character named Jeroboam—who previously served Solomon, rebelled, and skipped the country to hide—returns and approaches king Rehoboam to ask him to ease off on the intense labor demands (1 Ki 12:2–5). He’s speaking on behalf of Israelites, whose main complaint is conscripted labor.

Here’s where Rehoboam gets all macho, and says things like “My little finger is thicker than my father’s waist!” (1 Ki 12:10)

He responds to a plea for the suffering people with “You think my dad was tough? Just you wait.”

Rehoboam sends his head slave-driver, Adoniram, off to discipline the people (you think whips are bad … how about scorpions?).Adoniram was over Solomon’s forced labor back when he was building the temple (1 Ki 5:14), and he’s still in that position for Rehoboam.

That’s when the kingdom disintegrates. The people stone Adoniram to death, and all of Israel (except the tribe of Judah) abandons Rehoboam and follows Jeroboam as their king.

So did the kingdom divide because of slavery? Perhaps that was one reason—but it’s probably more accurate to say that the oppressive leadership of Rehoboam was the last straw for most of Israel.

Does this passage tell us what God thinks of slavery?

The truth is, this passage doesn’t actually give us information about what God thinks of slavery. We can only make inferences here.  Slavery was used to build something great—Solomon’s temple—but it also seems to have had a big part to play in the nation of Israel falling apart.

Regardless of what we know about God’s stance on slavery, we do know that he is just and hates oppression.

He executes justice for the orphan and the widow, and shows His love for the alien by giving him food and clothing. (Dt 18:10)

Do not rob the poor because he is poor,
Or crush the afflicted at the gate;
For the Lord will aplead their case
And take the life of those who rob them. (Pr 22:22–23)

May he vindicate the afflicted of the people,
Save the children of the needy
And crush the oppressor. (Ps 72:4)