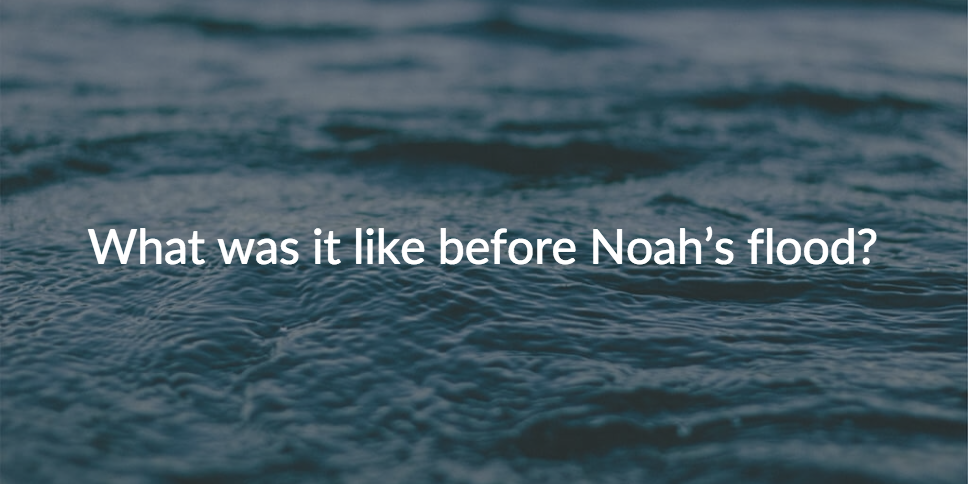 Many people have speculated on what life was in the time between Adam’s sin and Noah’s flood. The book of Genesis does not give us a perfect profile of antediluvian civilization, but the Word does tell us a few things of note:

1. At least two people made sacrifices to God: Cain and Abel (Gn 4:3–4). We don’t know if the practice of making animal sacrifices to God continued past Abel before the flood, but Noah seems to know what he’s doing when he makes a burnt offering to the Lord after exiting the ark (Gn 9:20). This may be related to “calling on the name of the Lord,” which began in the days of Seth (Gn 4:26).

4.There was at least one city: the city of Enoch. This is the city Cain founded in Genesis 4:17.

5. The Lord had not given man permission to eat animals yet. That does not happen until after Noah leaves the ark (Gn 9:3). This doesn’t mean all humans were vegetarian (there’s no reason to believe a very wicked people would respect God’s direction on what to eat), however.

6. For some reason, humans lived far longer than we know them to live now. Methuselah (the grandfather of Noah) lived 969 years—no, that’s not a typo (Gn 5:27). He lived just shy of a millennium.

7. We also know that a kind of people called “Nephilim” were on the earth in those days (Gn 6:3). “Nephilim” presumably means “fallen ones” in Hebrew. There are many theories as to what the Nephilim were: fallen angels, human warriors, human-angel hybrids, rulers, etc. What we do know is that they were “the mighty men who were of old, men of renown” (Gn 6:3).

8. Most importantly, we know that “wickedness of man was great on the earth, and that every intent of the thoughts of his heart was only evil continually” (Gn 6:5). Violence erupted within the human race right away: Cain killed Abel (Gn 4:8), and Cain’s descendant Lamech was a killer as well (Gn 4:23). The only exception was Noah, who was righteous and blameless—”Noah walked with God” (Gn 6:9).

These are some of the things the Bible tells us about the time before Noah’s flood. We don’t have a full view of what it was like, but that makes sense. After all, that’s not really what Genesis is all about.

What are some other things you’ve seen in the Bible that tell us what this time was like?