Who wrote the Psalms? Hint: it wasn’t just David 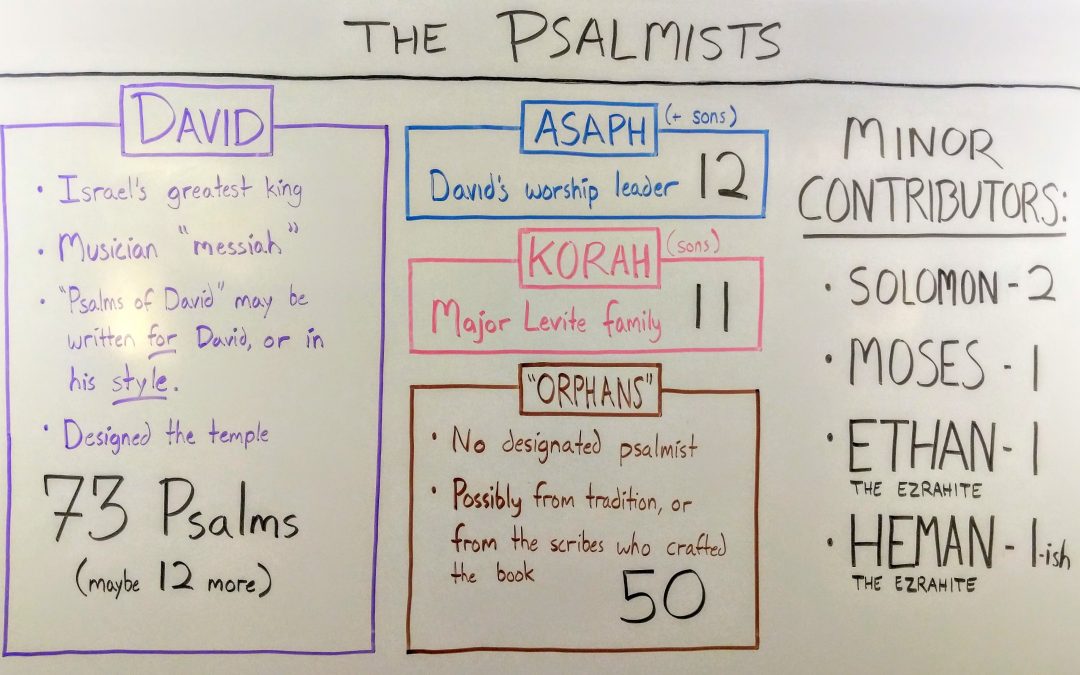 I grew up assuming two things about the book of Psalms, and they both turned out to be wrong:

David didn’t write the book of Psalms. In fact, David only wrote about half of the Psalms—73 out of all 150, to be precise (though the Latin Vulgate and Septuagint credit a few more to him).

He wasn’t even the one who put the whole collection together: some were written hundreds of years after he died!

So that leaves us with a few questions:

The good news is that we can find the answers using the psalm titles, some cross-references, and a little math. Let’s tackle these questions one by one.

How do we know who wrote the Psalms?

Old Testament authorship can be tricky, but Psalms makes it pretty easy for us in most cases. While most of the Old Testament books don’t explicitly state their authors—we’re looking at you, Job!—whoever put the book of Psalms together labeled the Psalms by author.

When look up a Psalm in your Bible, you’ll usually see something like this: 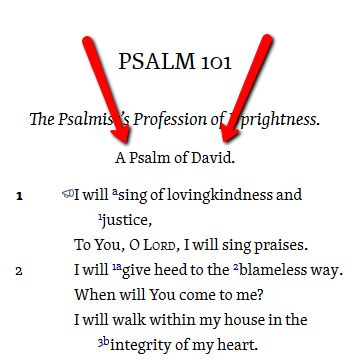 While the italic headings in this example were added long after Psalms was written, the line, “A Psalm of David” was actually written in the Hebrew manuscripts. It’s kind of like the hymnals you find in churches—they give you the song’s title and the name of the guy or lady who wrote it.

So for most of these Psalms, you can tell whom they recognized as author way back when.

If you’re one of those do-it-yourself Bible-study people (or, as I call them, Home Depot Christians*), you can quit reading this post right now. Just go look up all 150 psalms, record who wrote which ones, and then do the math on your own. But if you don’t have that kind of time on your hands, good news! I did all that dirty work for you . . . with a little help from Logos Bible Software. =)

*This is a lame joke. I know. But I promise I made it up right as I was typing that sentence. It’s funny via spontaneity—trust me on this.**

** Four years later: I don’t like this joke and I don’t think it was funny. But I’m leaving it up as a monument to my own fallible sense of humor.

How many people (besides David) wrote the Psalms? 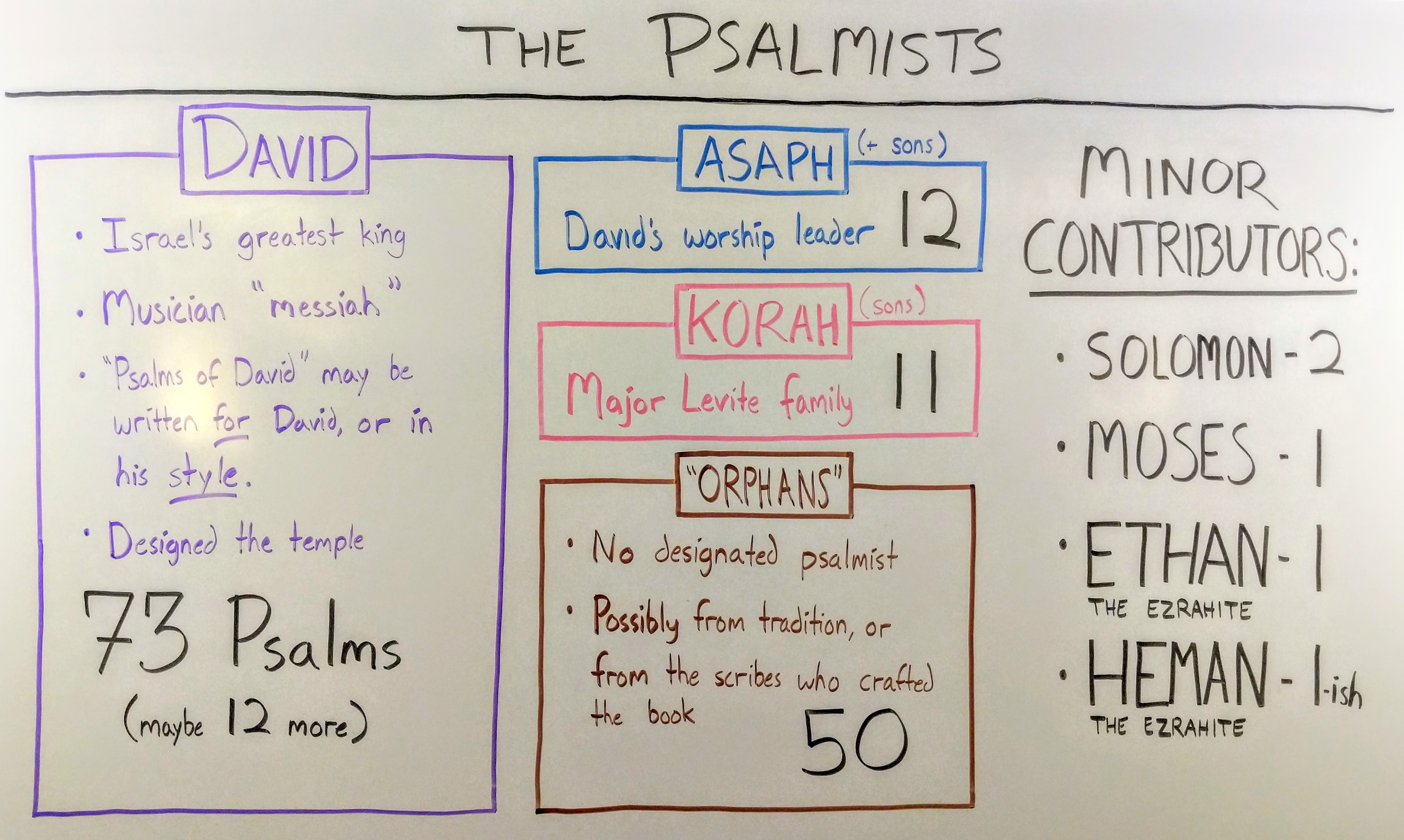 When you go through all the Psalms and note each heading, you get a long list of Psalmists. In fact, Psalms names more contributors than any other book of the Bible.

The Psalms name more than seven authors, including five individuals and two families (who wrote psalms over the centuries). Here’s the spread:

The remaining 50 “orphan psalms” aren’t credited to any one author. One nameless nobody could have written all 50, but there’s a better chance that they were written by many people over many years.

Which psalms did David write?

So we know David wrote the most of the psalms—73 that we’re sure of. These ones are his, specifically:

To be fair, the Septuagint (the Greek translation of the Old Testament) and the Latin Vulgate ascribe a few more psalms to David, which brings the count as high as 85.

Which psalms were not written by David?

I’m just being difficult. Here’s the breakdown of all the psalms written by people other than David.

The family of Asaph wrote 12 psalms:

The sons of Korah wrote 11 psalms:

Heman the Ezrahite coauthored Psalm 88 with the sons of Korah.

Did you know that the Psalms isn’t the only place where songs show up in the Bible? There are dozens of other songs scattered throughout Scripture. Here’s where you can learn about all of them.

I wrote The Beginner’s Guide to the Bible to give people an overview of what the Bible is, what it’s for, and what it’s all about. I explore how each of the Bible’s 66 books fit into the big picture, and you’ll walk away with enough knowledge to have a thoughtful conversation about the Bible with a pastor, an atheist, or anyone else.

David had a lot of help

Just by looking at these numbers, we see that David wrote more psalms than anyone else, but God used a wide range of talented musicians over hundreds of years to write these pieces back to Him.

We can’t neatly attribute Psalms to David, but I think that makes the book of Psalms a lot more interesting.

Oh, and one more thing: the Jews worshiped with songs written over a period of 700 years—and here we call 200-year-old hymns “old-fashioned.”