The Beginner’s Guide to the Gnostic Gospels 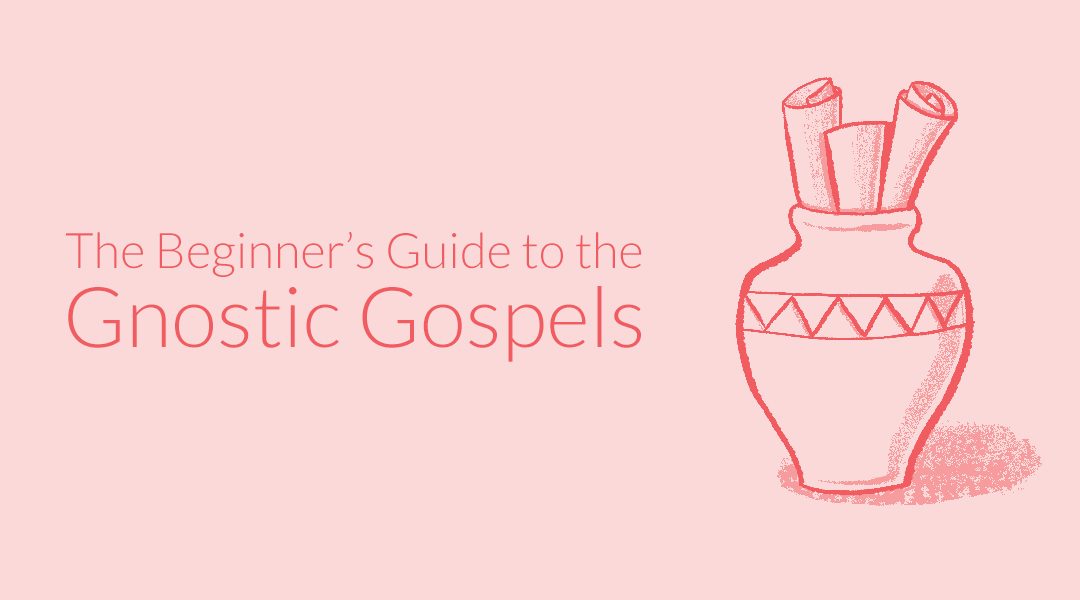 The Gnostic Gospels are ancient religious writings which falsely claim to be written by famous biblical figures such as Peter, Thomas, and Mary.

Most of the Gnostic Gospels that have survived were found in a collection of 13 books from the third and fourth century AD. The books contain a total of 52 Gnostic texts, not all of which are “gospels” or even claim to be Christian.

These were found buried in a jar near an Egyptian town called Nag Hammadi in 1945. (This is why the collection is also known as the Nag Hammadi Library.) These are the only surviving copies of many important Gnostic writings.

Scholars call these gospels “pseudepigrapha,” meaning that the claimed author is not the real author. Clues within the text—such as significant deviations in writing style and theology or references to events—point instead to the Gnostics (a catch-all term for ambiguous religious sects that sought divine knowledge). Gnosticism was a diverse spiritual movement with many branches, some of which had roots in Christianity.

Some people have referred to these books as “lost books of the Bible,” as if they were once included in the Christian canon. Some of them, including a book of sayings known as The Gospel of Thomas, even appear to contain original quotes from Jesus found nowhere else.

While they are all referred to as Gnostic texts, some of these writings (like The Gospel of Thomas) barely dip into Gnosticism and don’t connect to a specific Gnostic group. They’ve been dubbed “Gnostic” simply by association: they were found with blatantly Gnostic texts.

Catholics, Orthodox Christians, and Protestants all consider the Gnostic Gospels apocryphal writings that aren’t divinely inspired, and shouldn’t be included in the canon.

Scholars debate about what exactly we can learn from the Gnostic Gospels. Are they simply useful for learning about the ancient world? Are they a sort of “spiritual backdrop” for early Christianity? Or do they reveal that early Christian beliefs were more complex and diverse than orthodox writers would have us believe?

To explore the significance of the Gnostic Gospels, let’s start by taking a look at Gnosticism.

Gnosticism is an umbrella term for a diverse movement of more than 50 ancient spiritual sects that sprang up around the same time as early Christianity (though some sects predated Christianity). Gnosticism peaked in the first and second century, but continued to influence Western thought for centuries—and still survives in some spiritual belief systems today.

From the way ancient Christians referred to the writers we now know as the Gnostics, it has been notoriously difficult to categorize Gnosticism. The early church didn’t even use the term Gnosticism. They referred to some writers as gnostikos (meaning “learned” or “intellectual”), and it only evolved into a label for heretical beliefs much later.

The term Gnosticism first appeared in the seventeenth century, when a philosopher named Henry More used it to describe a heretical belief from Thyatira in the Book of Revelation. Later writers then began using Gnosticism to refer to other heretical beliefs from early Christianity. So until the discovery of the Nag Hammadi Library, most of what we knew about Gnosticism came from critics of Gnosticism and a handful of Gnostic writings that survived.

Modern scholars couldn’t tell whether Gnosticism was an interreligious movement, a separate religion, or a specific sect of Judaism or Christianity. As a result, there was very little consensus about what fell under “Gnosticism” until after the Nag Hammadi Library was discovered.

(And even now, it’s a bit of a touchy subject among scholars.)

Were the Gnostics Christians?

Sometimes you’ll hear Gnosticism referred to as Christian Gnosticism or Jewish Gnosticism. This is because forms of Gnosticism emerged from Judeo-Christian teachings (among other things), and split off from accepted Christian beliefs. For example, some Gnostic arguments may have been riffs off of Paul’s writings on the separation of the flesh and the spirit (like we find in Galatians 5:17–19).

And as you could probably tell from the names of the Gnostic Gospels, some Gnostic groups claimed to be Christian, even though they rejected foundational Christian beliefs.

It’s hard to make generalizations about all Gnostics since there were so many sects, and they varied in the degree to which they deviated from orthodox Christianity. But many central Gnostic beliefs were not rooted in the Bible or Christian tradition, and conformed elements of Christianity to fit other philosophical and spiritual belief systems.

At best, the Gnostics were quasi-Christian, professing a form of Christianity that had been so contaminated by Greek philosophy and other belief systems that it had little in common with the larger Christian church.

Still, since Gnosticism was such a diverse movement, there are many different approaches to categorizing it, and while the early church rejected “Gnostic Christian” writings as heretical, some scholars still call them Christian.

Why did they write about Jesus, using the names of biblical figures?

Ancient writers sometimes used pseudepigraphal writings to lend credibility to their ideas within particular groups. (As we see with the Letter of Aristeas and the origin of the Septuagint.)

But not all pseudepigrapha was ill-intended or blatant forgery.

Sometimes it was simply an error: the original author was unknown, and someone attributed it to the wrong person later. Pseudepigrapha could also be a tribute to a well-respected person who recently died. And if a church leader permitted someone to write on their behalf while they were alive, that person would sometimes continue to do this for years after their death.

However it happened, these writings presented a problem: would people know the difference later? Sometimes the church caught on and called these writings out, like Eusebius of Caesarea did when “new writings” from Clement of Rome seemed to appear out of thin air:

“And now some have only the other day brought forward other wordy and lengthy compositions as being Clement’s, containing dialogues of Peter and Appion, of which there is absolutely no mention in the ancients.” —Ecclesiastical History

But less discerning readers sometimes let pseudepigraphal writings slip through, and nobody caught the mistakes until much later. After discovering blatant forgeries, the early church generally rejected pseudepigrapha as inauthentic and unauthoritative (with some exceptions).

Since some forms of Gnosticism splintered off from orthodox Christian beliefs, they likely considered themselves Christians, and they would’ve had good reason for wanting their beliefs to be accepted within the church.

Fun fact: The Nag Hammadi Library also contained a copy of Plato’s Republic that was thoroughly edited to align with Gnostic ideas.

Who really wrote the Gnostic texts?

Most sects of Gnosticism were named after the leaders who first championed their ideas. The majority of these Gnostic writings didn’t survive, leaving us with scattered quotes, references, and descriptions from their critics.

But while some of the texts we know as the Gnostic Gospels survived, we will likely never know who actually wrote them. The only bylines are fake. And even though clues within the texts can tell us what strains of Gnosticism they may have been influenced by, they can’t tell us who wrote them.

While the vast majority of the Gnostic writings we have today come from the Nag Hammadi Library, a smattering of texts came from other sources, and we had access to them before 1945.

Scholars had access to 11 Gnostic texts before the Nag Hammadi Library, and they weren’t all complete (one is only a summary). Some were also “reconstructed” from writers who criticized Gnosticism.

Here they are, grouped by the codex (book) they came in or the manner in which they were preserved.

Saved by the church

The Berlin Codex (also known as The Akhmim Codex)

Fortunately, the discovery of the Nag Hammadi Library exposed scholars to a much broader picture of Gnosticism—one that hadn’t first been filtered through the eyes of its critics.

Each book from the Nag Hammadi Library contains several texts, which were likely written in Greek (possibly as early as the first century) and later translated into Coptic—an Egyptian language related to Greek and ancient Egyptian.

Not all these texts were explicitly Gnostic. Three were Egyptian wisdom texts from the Corpus Hermeticum, and one was a heavily edited (in other words, Gnosticized) version of Plato’s Republic.

Here are all the Gnostic texts from the Nag Hammadi Library, organized by the codex they were found in. Some are repeats. For example, copies of The Apocryphon of John appear in Codex II, Codex III, and Codex IV.

Scholars had never seen many of these works before—they’d only heard of them from other ancient writers, or read quotes in other texts.

Fun fact: “Codex XIII” isn’t technically a separate book. It’s only eight pages, and only contains the first few lines of On the Origin of the World at the bottom of the eighth page. At some point before the codices were stuffed in a jar and buried in the ground, someone took these pages from another book and put them in the cover of the sixth book. Since it was clearly not connected to the material in the sixth book, it’s been treated as the remains of a separate codex.

How was the Nag Hammadi Library discovered?

The story of the Nag Hammadi Library’s discovery has a lot of parallels to the Dead Sea Scrolls, complete with an accidental encounter, disputes over who “owned” the books, backchannel sales of the texts, mishandling of the manuscripts, and controversy over what the discovery meant for the Bible.

Here are the nuts and bolts.

A farmer named Muhammad Ali al-Samman and his brother found the jar full of books while digging for fertilizer near some caves. They stumbled onto more than 1,000 pages that were well over 1,000 years old. They planned to gradually sell the books individually, so they didn’t report it, and it took a long time for anyone to realize the significance of their discovery.

In the meantime, their mom was worried the texts might have “dangerous effects,” so she burned some of them.

A year after their discovery, the brothers got caught up in a feud, so they didn’t have time for silly old books anymore, and they gave them to a priest. Over the next few years, the priest sold them to an antique dealer in Cairo. Before the Department of Antiquities could snatch them all up and permanently claim them for Egypt, a codex slipped away to Belgium.

The Carl Gustav Jung Institute purchased it in 1951. When Carl Jung died ten years later, there was a kerfuffle about who owned the codex, and it took another decade for the book to make it back to Cairo.

Much like the Dead Sea Scrolls, there were a lot of politics involved, and scholars around the world had to wait an excruciatingly long time to get access to the documents.

The first translation wasn’t published until 1977, more than 30 years after the initial discovery.

What do we do with the Gnostic Gospels?

The Gnostic Gospels claimed to be written by important biblical figures. But they weren’t. And even as various Gnostic movements gained traction, the early church almost immediately rejected them as heretical. Before the end of the twentieth century, most of what we knew about these gospels came from early church fathers who specifically wrote about them to condemn them.

Reading these gospels today can teach us plenty about the belief systems early Christianity interacted with, but scholars still debate what—if anything—we can trust about these texts.

You can read them online through The Gnostic Society Library. Or not. It’s up to you. But nobody is putting these in your Bible anytime soon.