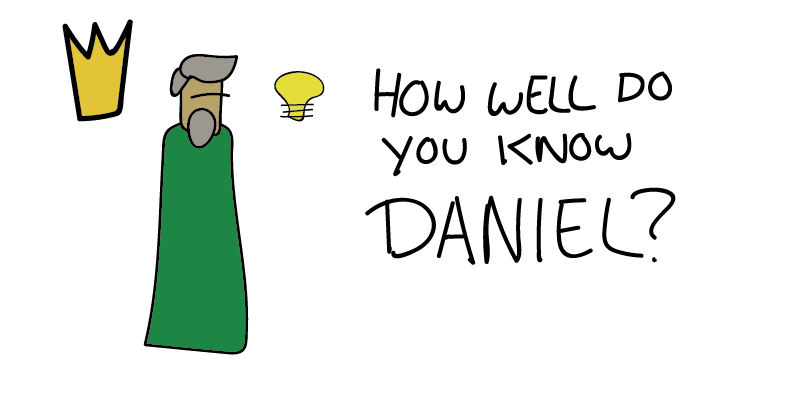 Everyone knows Daniel was thrown into a lions’ den and went on some kind of fast. But there’s a lot more to this character than the Sunday school lessons let on!

Few Bible characters have the kind of status that Daniel does. He’s a righteous and wise hero of the Old Testament whose decisions save the lives of many.

You really ought to dig into Daniel with a Bible study and commentary to learn about this character for yourself, but for starters, here’s 12 biblical facts about Daniel that don’t get a lot of screen time in church. (And I may have used my favorite Bible software to make this list.)

1. Daniel is from David’s royal family

For hundreds of years, a descendant of David had been on the throne in Jerusalem—well, besides one imposter queen (2 Ki 11:1–3). In 605 B.C., the dynasty was in its twilight years. Nebuchadnezzar successfully besieges Jerusalem and carries off some of the treasure from the temple of God to Babylon.

But that’s not all he takes. Nebuchadnezzar also captures some young men of the royal family with him to serve him in his court (Da 1:3). Daniel is one of them (1:6). This probably takes place before Daniel has finished adolescence.

Why does this happen? Maybe Nebuchadnezzar assumes Jerusalem’s leaders won’t give him any trouble if their sons are off in Babylon—kind of like high-profile hostages. Maybe he just wants to show off “pet” Israelite royalty to people who visit his palace.

Whatever the case, he makes a good choice to pick Daniel.

2. Daniel is a good-looking dude

Not just any royal kid gets to go to Babylon: only the handsome ones. Nebuchadnezzar’s criteria for serving in his court includes physical appearance (Da 1:4).

3. Daniel is renowned for his wisdom and intelligence

You have to be a looker and a thinker to make it in the palace. All the captives need to be able to pass a three-year course in Babylonian language and literature, but Daniel and his friends are found to be 10 times wiser than all the experienced magicians and enchanters in the whole kingdom (Da 1:20).

Daniel’s wisdom makes him a legend in his own time. When Nebuchadnezzar’s son sees a terrifying vision, his mother refers him to Daniel. This is how she describes him:

[Daniel] was found to have insight and intelligence and wisdom like that of the gods. (Da 5:11)

And Daniel’s fame isn’t a royal family secret. Another prophet, Ezekiel, references Daniel when he’s preaching against a clever, but arrogant ruler of another nation. This ruler thinks he’s a god, and might even be wiser than Daniel:

Behold, you are wiser than Daniel;
There is no secret that is a match for you. (Eze 28:3)

(Or maybe Ezekiel is just mocking that guy.)

It’s cool in and of itself that Daniel is being quoted by a contemporary.* But it’s also interesting that a Hebrew writer chooses Daniel as a reference point, rather than, say, Solomon.

*OK, full disclosure, it’s possible that there was an ancient legendary figure named Daniel who has nothing to do with our prophet.

4. Daniel’s specialty is a dream interpretation

There are several dreams in the Bible, and many of them seem to be straightforward instructions from God. But other dreams use bizarre symbolism to communicate something to the dreamer.

When someone gets a weird dream like this, there are a few ways they can interpret it:

But that doesn’t mean Daniel can interpret every dream. In fact, Daniel has trouble interpreting some of his own dreams. When that happens, Daniel goes for option #2 of those listed above: he asks one of the people in his dream to interpret what is happening for him (Da 7:15–16).

Don’t mistake Daniel as some conjurer of cheap tricks. He’s not just a wise dream interpreter. He’s characterized by his unwavering faithfulness to the Law of Moses.

Daniel chooses not to defile himself with the King’s food upon his arrival in Babylon—the food would have rendered him ceremonially unclean according to the Torah (Da 1:8). And toward the end of his life he continues to pray to God and not the king, even though it puts him in danger (Da 6:13).

His faithfulness to God earns him another honorable mention from the prophet Ezekiel.

In the 14th chapter of Ezekiel, God uses Daniel, Noah, and Job as examples of extremely righteous men. He’s painting a picture to say that if God chooses to destroy a nation, it gets destroyed—and even three uber-righteous people like Daniel couldn’t save their children. You can read the whole story in Ezekiel 14:12–23.

In fact, Daniel is presented as such a righteous person in Scripture that …wait, you know what? This deserves a point all to itself.

6. The Bible gives us zero dirt on Daniel

Abraham had his Hagar incident.

Moses struck the rock and was banned from Canaan.

And those other two sterling examples of righteousness, Noah and Job? Noah got drunk and naked (Gen 9:21). Even Job repented because of how he spoke about God (Job 38:2; 42:1–6).

We have nothing on Daniel.

In fact, when his political opponents tried to get dirt on him, their only option was to make it illegal to obey God (Da 6:4–5).

Daniel is made the chief prefect of the wise men in Babylon after interpreting Nebuchadnezzar’s first dream (Da 2:48; 4:9, 5:11).

How crazy is that? Daniel is placed in a position to oversee the people who relied on other gods to enlighten them.

But this brings up an interesting aspect of Daniel that often gets overlooked. As far as these magicians are concerned, Daniel is a freak of nature.

When Daniel is still new to Babylon, Nebuchadnezzar has a troubling dream that (at first) nobody can interpret. The king doesn’t make it any easier on the magicians and diviners, either—he doesn’t even tell them what the dream was. (“If you’re really psychic, you should be able to tell me what I dreamed, right?”)

You know what the magicians’ response is?

No one can reveal it to the king except the gods, and they do not live among humans. (Da 2:11)

In a way, God uses Daniel’s wisdom to show up the gods of Babylon on their own turf—even though his (God’s) own temple has been destroyed by the Babylonians.

8. Daniel is a government official under four kings

Daniel is made an officer in Babylon by four kings:

The name “Daniel” means “[the Jewish] God has judged.” But the Babylonians give him a new name: “Belteshazzar.” This new name means “Bel protect him,” with Bel being the name of a Babylonian god (4:8).

Daniel is captured as a young man in Nebuchadnezzar’s first siege of Jerusalem, and he lives in Babylon right into the reign of Cyrus the Persian.

This is the same Cyrus who decrees that the Israelite exiles may return to Jerusalem and rebuild the temple that Nebuchadnezzar destroyed (Ezra 1:1–4).

That’s a long time, and so it probably makes sense to point out that …

11. Daniel was probably in his eighties when he was thrown to the lions

Daniel was taken to Babylon as a young man—likely before he had finished puberty. So let’s say he was between 10 and 18 years of age.

The Babylonian captivity lasted 70 years, which would put Daniel in his eighties at the beginning of Darius’ reign in Daniel 6. This is when the whole lions’ den episode takes place.

If this is the case, then we may need to update some of our Sunday school artwork! =)

12. Daniel introduces both Gabriel and Michael

You may have heard that there are two good angels who are explicitly named in the Bible: Gabriel and Michael. These two angels show up in both the Old and New Testaments doing cool stuff like announcing the coming birth of Christ or fighting Satan.

But guess where we meet them first? Yep: the book of Daniel.

Daniel meets Gabriel during one of Daniel’s troubling visions (it involves a ram, a goat, and a crazy talking horn). Gabriel is told to tell Daniel what’s going on (8:15–19). Gabriel shows up later to tell Daniel that God has plans to make an end to Israel’s sins (9:21–27).

We don’t see any conversations between Daniel and Michael, but he is working behind the scenes in the later chapters of Daniel. Michael is a warrior angel who combats opposing forces from Persia and Greece (10:13, 21). Daniel is told that at the time of the end, Michael will arise on behalf of Israel again (12:1).

I used my favorite Bible study tool, Logos Bible software, to do research that made this post possible. If you’re a Bible geek like me, you might want to check it out.