The Torah: a Quick Overview of the Pentateuch

Each of these books has their own structure and story to tell, but right now we’re going to zoom out to look at the whole work of the Torah. 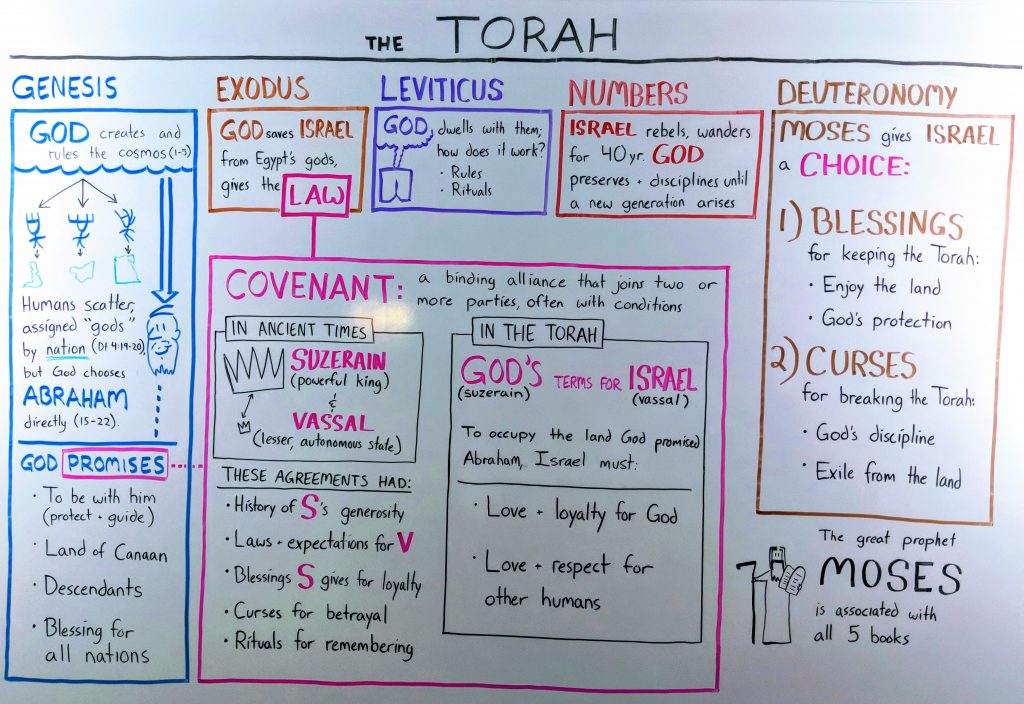 What does “Torah” mean?

The Hebrew word torah means “law,” or “regulations.” And if you’re at all familiar with these books, that’s almost all the explanation you need. This is where the prophet Moses introduces the people of Israel to the Ten Commandments, along with a host of other “thou shalts” and “thou shalt nots.”  If you’re reading the Bible in English, you won’t find the word “Torah” used—instead, you’ll mostly just see the phrase, “the law.”

But this isn’t the kind of law that we’re used to thinking of today. When the writers of the Bible mention “the law,” they’re usually referring to one of two things:

1. The partnership between God and Israel

Humans make modern laws to maintain social order. But the Torah isn’t about legislation; it’s about allegiance. The second book of the Torah, Exodus, tells the story of how God made a pact between the nation of Israel and himself: he would be their god, and they would be his people. This type of pact was known in those days as a covenant, which was a common kind of agreement in the ancient Near East.

A covenant is similar to a contract or a treaty. In ancient times, some kingdoms would become powerful enough to exert their authority beyond their own borders. These kings would come across smaller, lesser nations or city-states and strike up alliances with them. The lesser kings, called vassals, would swear allegiance to the greater king, called the suzerain. The vassals would maintain their own national identity and a degree of autonomy, and would depend on the economic opportunities and military protection provided by the suzerain. The mighty suzerain got tribute and taxes from the vassal—not to mention the bragging rights of another kingdom under their authority.

In a similar fashion, God himself assumes the role of the suzerain in the Torah. He rescues the nation of Israel from Egypt, and offers to partner with them in a covenant. If Israel keeps God’s rules (his law), they will enjoy his guidance and protection in a land of their own. If they don’t, God will remove his protection, and Israel won’t be able to keep their land. Israel agrees to these terms, and the covenant of the law is enacted.

That covenant agreement is known throughout the rest of the Bible as “the law.”

These are the decrees, the laws and the regulations that the Lord established at Mount Sinai between himself and the Israelites through Moses. (Leviticus 26:46)

“The law” can refer to the covenant in general, but you’ll also find references to “laws” within the law.  These are the “thou shalts” and the “thou shalt nots.” They’re the rituals for observing feasts and offering sacrifices. They’re the rules about food, sex, clothing, and justice. They’re the directions for setting up an acceptable place of worship. That kind of stuff.

You’ll find these throughout the last half of Exodus, and Leviticus is almost entirely these lists of regulations. They’re interspersed throughout Numbers, and Deuteronomy groups them in the middle. There are hundreds of individual laws, but they all boil down to two overarching principles:

The specific reasons why certain laws exist can be nebulous. Scholars have made all kinds of arguments for why the ancient Jews believed pork and mixed fabrics were off-limits. The important thing to remember is that they believed that these practices separated them from the surrounding nations of the ancient Near East and reflected how their God is separate from the gods of the other nations.

3. The part of Scripture that records that covenant

Summary of the Pentateuch

The Torah is a five-book work, each book serving its purpose to make the whole. Here’s the primary contents of each book, and how each contributes to the overall work of the Law of Moses.

Genesis (full summary here) gives the general backstory of the Torah, setting up a few key dynamics in the cosmos. The ancient Israelites believed that their God called the world out of chaos, and filled it with plants, animals, and people. This God was in charge of both the physical and the metaphysical realms (earth and heaven) and their inhabitants. At the start of the Bible, God, the humans, and the rest of the spiritual beings are at peace with one another.

However, rebellion breaks out, and at least one spiritual rebel (called “the serpent”) tempts humans to rebel against God’s order—instead choosing what’s right and wrong for themselves. Things get violent, and eventually God divides the human and spiritual worlds into nations. (That’s the story of the Tower of Babel.) The ancient Israelites believed that each nation was assigned their own pantheon of spiritual beings (“gods”) to seek protection and provision from. (Deuteronomy 4:19–20; 32:7–9)

“I will make you [Abraham] into a great nation,
and I will bless you […]
and all peoples on earth
will be blessed through you.” (Genesis 12:3–4)

However, the being above all the other gods (“God Most High”), chooses to deal directly with a man we know as Abraham. He promises to give Abraham’s descendants a land of their own. And eventually, God plans to bless every nation through Abraham, even the nations he’s not directly working with. The book of Genesis closes with Abraham’s grandson, named Israel, moving his family to Egypt to escape a famine.

Exodus (full summary here) tells the story of how Israel exits Egypt (hence the name) and enters a covenant with God. The descendants of Abraham multiplied in Egypt, and so Pharaoh (part of the Egyptian pantheon) puts them to work as slaves. God then rescues the Israelites from both the oppressive Egyptian humans and their oppressive Egyptian gods.

God brings the people of Israel to the foot of a mountain in the wilderness, called Mount Sinai. Here, the people enter that covenant we discussed earlier. Throughout this process, God works with a prophet named Moses. He becomes the human go-between for both God and Israel, tasked with calling the people to follow God and also dealing with their complaints and disputes. He represents God to the people, and mediates on behalf of the nation when the people break God’s laws.

Exodus closes with Moses and the people constructing a portable temple (called the tabernacle). God then comes down from the mountaintop and fills the tabernacle—and just like that, the most powerful being in the cosmos moves in to a migrant camp of mortals.

The first half of this book focuses on expectations for the Israelite priests: the people who maintained the tabernacle and performed religious rituals to God on behalf of the rest of the people. These priests all came from a subgroup of Israelites: the tribe of Levi. The book gets its name from the Levitical priesthood.

Numbers (full summary here) charts the journey from Mount Sinai to the very edge of the promised land of Canaan … twice. The book gets its name because at the beginning and end of the book, Moses numbers the people in a census. After the first census, Moses and the people move to the edge of the promised land. However, when a few scouts report back that the people in the land are too strong to be driven out, the people revolt against Moses and God—planning to kill Moses and go back to serving Pharaoh and the Egyptians.

With this move, the whole generation of Israelites forfeits the promised land. The people don’t want to take the land, but God can’t let them undo his work and re-enslave their children in Egypt. So instead God guides, protects, and disciplines the people in the wilderness for the next 40 years, until the next generation replaces the population. This generation comes back to the edge of Canaan, almost ready to possess the land.

Throughout Numbers, we see a tension that builds for the rest of the Old Testament: God finding ways to keep his end of the deal even though Israel consistently doesn’t keep theirs. When the people rebel against Moses and God, the Lord punishes them—but there’s a always remnant of people whom God spares.

Deuteronomy (full summary here) is both a recap of the Torah and a preview of the rest of the Old Testament. The name itself comes from the Greek word for “second law,” because in Deuteronomy Moses again presents God’s laws to the next generation of Israel. Moses reviews all God’s generous and mighty deeds: how he rescued them from Egypt, thundered from Mount Sinai, and provided for them in the wilderness.

Moses then tells the people that when they enter the land, they will need to choose whether or not they will serve the God who gave it to them. They can choose to abide by the laws Moses gives them and enjoy God’s blessings of protection and prosperity. Or, they can abandon the Torah and choose what’s right and wrong for themselves (like the rebellious humans in Genesis). If they make themselves enemies of God by breaking the covenant, then God will remove his protection, and Israel won’t be able to keep their land.

Moses strongly advises that the people just stick with the Torah.