Who Was Bartholomew the Apostle? The Beginner’s Guide 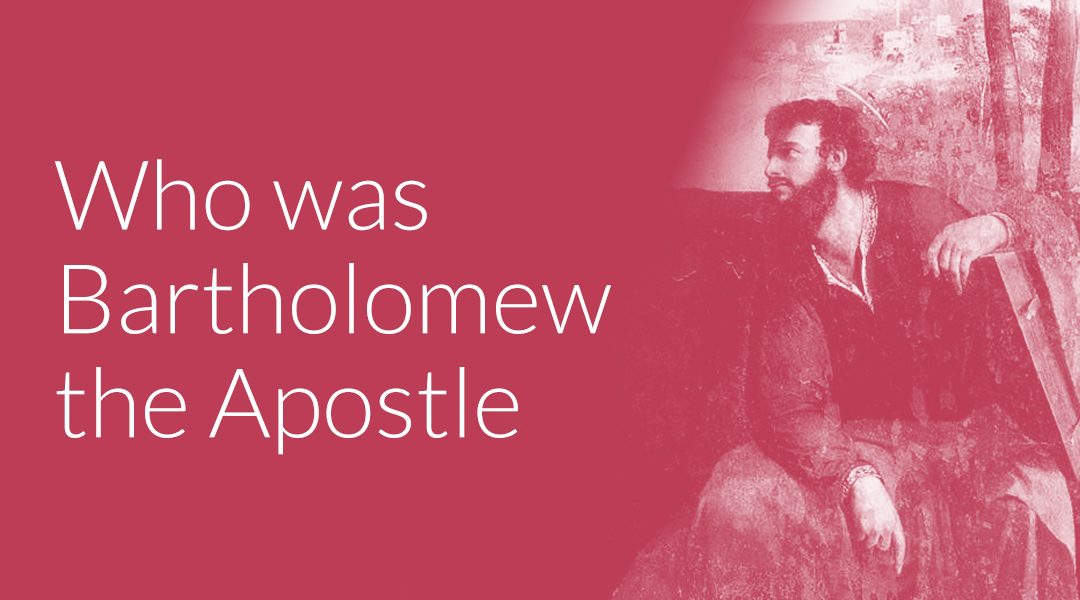 Bartholomew was one of the 12 main disciples of Jesus Christ. In the entire New Testament, his name only appears in the four lists of the twelve apostles (Matthew 10:2–4, Mark 3:16–19, Luke 6:14–16, Acts 1:1–13). He’s never given any distinguishing qualities or titles, so aside from his name, we know almost nothing about him.

Known as “the apostles” or “ones who were sent,” Bartholomew and the other disciples witnessed Jesus’ ministry for about three years. After Jesus’ death, they began the movement which became known as Christianity. This makes Bartholomew one of the most important and authoritative leaders of the early church, and he likely helped spread the gospel to particular regions during the first century—but he’s never explicitly mentioned or singled out in any of the epistles.

The earliest surviving writings about Bartholomew come from centuries after his death (some of which were falsely attributed to him), and there are various traditions about where he went, what he did, and how he died.

So what do we really know about him? In this guide, we’ll explore what scholars and tradition have to say about Bartholomew the Apostle.

Facts about Bartholomew the Apostle

While the Bible only gives us his name, there are some details we can glean from his inclusion in the New Testament, and early church writings may give us a little bit more information.

He was one of the Twelve

Only four passages in the Bible explicitly name all twelve of the apostles (Matthew 10:2–4, Mark 3:16–19, Luke 6:14–16, Acts 1:1–13). Bartholomew appears in all of them. Even though he isn’t mentioned by name in any other passages, his inclusion in this group tells us he was present in most of the significant events recorded in the gospels, as the gospel writers frequently refer to the disciples as a group, and their presence is often implied from the moment Jesus called them.

As an apostle, Bartholomew personally witnessed most of Jesus’ miracles and heard most of his teachings. He lived with Jesus for about three years. When Jesus sent out the twelve apostles, Bartholomew (possibly paired with Philip) was given the power to “heal the sick, raise the dead, cleanse those who have leprosy, drive out demons” (Matthew 10:8).

After Jesus died, was resurrected, and ascended to heaven, Bartholomew received the power of the Holy Spirit along with the other apostles (Acts 2:1).

His father’s name was probably Talmai

The name “Bartholomew” most likely comes from Aramaic (Bar-Talmai), meaning “son of Talmai.” Patronymic names—meaning names that come from the name of a person’s father, like how Johnson in English originally meant “son of John”—were common in ancient Israel. In the Gospel of Matthew, Jesus refers to Peter by his patronymic name, Bar-Jonah (Matthew 16:17), meaning son of Jonah (or in some manuscripts, John).

If Bartholomew is a patronymic name, it tells us his father was someone named Talmai (or Tholami or Tholomaeus in English). That isn’t very useful, since it was the name of a couple different Old Testament figures—one of the nephilim (Numbers 13:22) and a king of Geshur (2 Samuel 3:22)—and there’s no one named Talmai in the New Testament.

But if Bartholomew is a patronymic surname, he probably would’ve been known by another name, too. And that’s why this is one of the main arguments for suggesting Bartholomew and Nathanael were the same person: Nathanael Bartholomew.

“The name ‘Bartholomew’ may stand by itself in the apostolic lists as a proper name. It is not necessarily a patronymic. The patronymic is normally expressed in the lists by the Greek genitive, not by the Aramaic bar.”

More on Nathanael in a moment.

He is traditionally associated with Philip

In three of the four lists of apostles, Bartholomew appears right after Philip, which appears to suggest an association of some kind between them. Later traditions also described the two of them doing ministry together. In the apocryphal text Acts of Philip, Philip and Bartholomew were both crucified upside down, until Philip’s preaching convinces the onlookers to free them.

(Bizarrely, Philip asks their antagonists to leave him on the cross, but to go ahead and free Bartholomew.)

As we’ll see in a moment, their association is another reason many Christians believe Bartholomew and Nathanael are the same person. But his position next to Philip in the lists also might not mean anything—since they’re not listed together in Acts.

Fun fact: Saint Luke likely wrote the gospel that bears his name and the Book of Acts. This means he listed Bartholomew and Philip together in one of his books, but not in the other. If their association was important, you would think he’d be consistent in placing them together . . . but maybe not?

He might have been the same person as Nathanael

John’s gospel is the only one that mentions a man named Nathanael, who appears to be an apostle (John 1:43–51). John also never mentions Bartholomew. The Bible doesn’t say Nathanael and Bartholomew are the same person. But there are several reasons why for centuries, many Christians have believed they were.

It was common for people in the first century to be known by two names. Sometimes it was because they were given a new name, like Simon, also known as Peter, who was also called Simon Peter. Or, maybe they were known by one name in Hebrew and another in Greek, like Paul, also known as Saul and John, also called Mark. The Bible technically calls one apostle “the Twin” . . . which probably wasn’t his actual name.

If Bartholomew was a last name meaning “son of Talmai,” then we can certainly assume he was known by another name. He could’ve been Nathanael Bartholomew. (But as we discussed above, he could’ve also just been a guy named Bartholomew.)

Since the synoptic gospels all list Philip and Bartholomew together, many scholars believe this implies a relationship between them, as the pairings often do for the other apostles (like Peter and his brother Andrew, and James and John, the sons of Zebedee). If Nathanael is Bartholomew, then the Gospel of John makes that association more clear. Philip seeks Nathanael out (implying they knew each other) and brings him to Jesus (John 1:45–47).

Nathanael also appears to be an apostle. Jesus doesn’t explicitly call him to “come, follow me,” but in their first encounter, he does tell Nathanael, “Very truly I tell you, you will see ‘heaven open, and the angels of God ascending and descending on’ the Son of Man” (John 1:51). John also seems to include him among the apostles:

“Afterward Jesus appeared again to his disciples, by the Sea of Galilee. It happened this way: Simon Peter, Thomas (also known as Didymus), Nathanael from Cana in Galilee, the sons of Zebedee, and two other disciples were together.” —John 21:1–2

“Since the identification of Bartholomew with Nathanael is not conclusive, to assume it without question is to go beyond the evidence. Certainty is unattainable with the present evidence, but to reject categorically the identification is likewise unwarranted.” —The Anchor Yale Bible Dictionary

If Bartholomew and Nathanael are the same person though, then the Gospel of John gives us a couple more opportunities to learn about him.

Nathanael was skeptical of Jesus because he came from Nazareth, famously saying, “Nazareth! Can anything good come from there?” (John 1:46). But after Jesus demonstrates his divinity, Nathanael proclaims, “Rabbi, you are the Son of God; you are the king of Israel” (John 1:49).

After Jesus appears to his disciples, seven of them go out fishing—and Nathanael is one of them (John 21:1–3). The gospels explicitly tell us that several of the disciples—Peter, the sons of Zebedee, and Peter’s brother Andrew (who may or may not have been present)—were fishermen. Thomas, Nathanael, and the two unnamed disciples in the passage were either fishermen as well, or else they were just along for the ride and learning a new trade.

Ultimately, it’s hard to say whether Nathanael and Bartholomew are or aren’t the same person. But even if they are, it doesn’t give us much more to go on. Since he only appears in the Gospel of John, Nathanael is basically as obscure as Bartholomew.

Bartholomew was probably a missionary

The Greek word we translate as “apostle” is apostolos. It literally means “one who is sent.” During his ministry, Jesus sent the apostles to specific regions in pairs of two (Mark 6:7–13), and before his ascension, he commanded them to “go and make disciples of all nations” (Matthew 28:19).

The Bible doesn’t tell us which nation each apostle went to, but for many of them, early church records were pretty consistent. However, traditions vary about where Bartholomew went.

In the fourth century, Eusebius of Caesarea wrote that Bartholomew preached in India:

“Pantænus was one of these, and is said to have gone to India. It is reported that among persons there who knew of Christ, he found the Gospel according to Matthew, which had anticipated his own arrival. For Bartholomew, one of the apostles, had preached to them, and left with them the writing of Matthew in the Hebrew language, which they had preserved till that time.” —Church History

Eusebius had access to one of the greatest libraries of the ancient world, but he also made mistakes now and then (he confused Philip the Apostle with Philip the Deacon, for example). Other traditions, some of which are much less reliable (like the Acts of Philip), claim Bartholomew preached in places like Armenia, Ethiopia, Lycaonia, Mesopotamia, and Parthia.

How did the Apostle Bartholomew die?

Like most of the apostles, Bartholomew was probably martyred—but there are several traditions about how exactly he died. The most popular and prolific tradition is that he was flayed and then beheaded, which is why most art portraying him shows him holding or wearing his skin in some way, or else associates him with flaying knives.

Foxe’s Book of Martyrs records that in India, “He was at length cruelly beaten and then crucified by the impatient idolaters.”

“There be divers opinions of the manner of his passion. For the blessed Dorotheus saith that he was crucified, and saith also: Bartholomew preached to men of India, and delivered to them the gospel after Matthew in their proper tongue. He died in Alban, a city of great Armenia, crucified the head downward. St. Theoderus saith that he was flayed, and it is read in many books that he was beheaded only. And this contrariety may be assoiled in this manner, that some say that he was crucified and was taken down ere he died, and for to have greater torment he was flayed and at the last beheaded.”

Another tradition claims he was beaten unconscious and drowned in the ocean. For his sake, I hope it was that one.

However he died, it was probably pretty bad. But while they may not agree on the manner of his death, all of the various traditions connect Bartholomew’s death to his ministry—wherever that was.

An apostle is an apostle

While it would be nice if someone in the first century had taken the time to sit down and record the lives of each of the apostles, many of them were too busy racing to spread the gospel to the farthest reaches of the known world, doing their best to love as Jesus loved (John 13:34–35), and dying as a result.

The details of Bartholomew’s life—possibly even his true first name—are lost and forgotten. The only concrete fact of his life that remains is his close association with Jesus Christ. And in the end, maybe that’s all that matters.