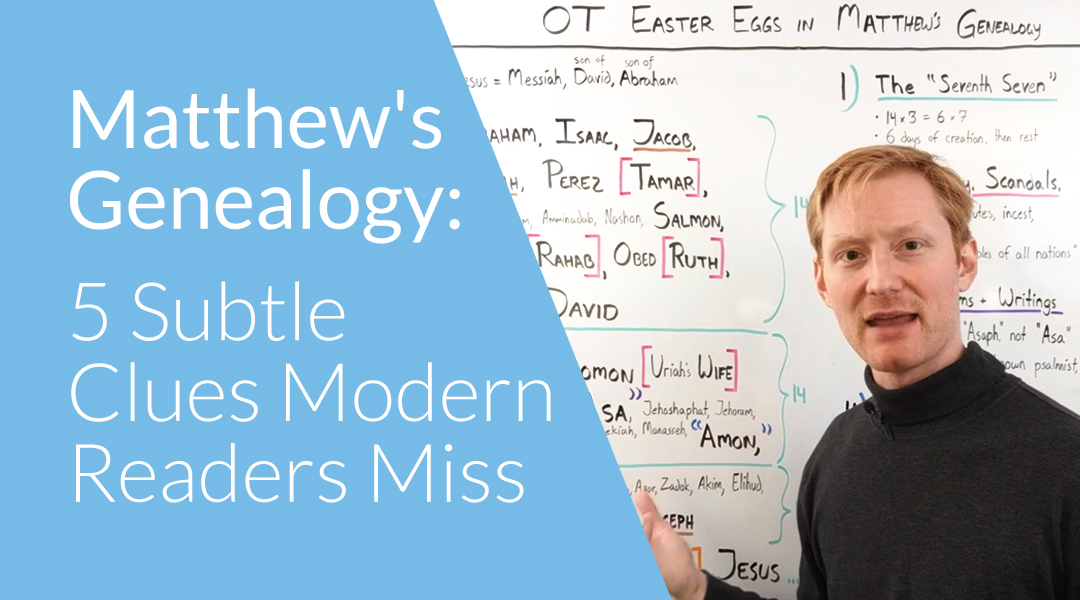 What is the deal with Matthew chapter one?

Why would you begin the story of Jesus (and the entire New Testament) with a boring list of more than 40 names?

Well, as is often the case with Scripture, there’s a lot bubbling below the surface—including a few interesting “Easter eggs” that an ancient Jewish reader who was familiar with the Old Testament might notice when reading Matthew’s genealogy of Jesus. 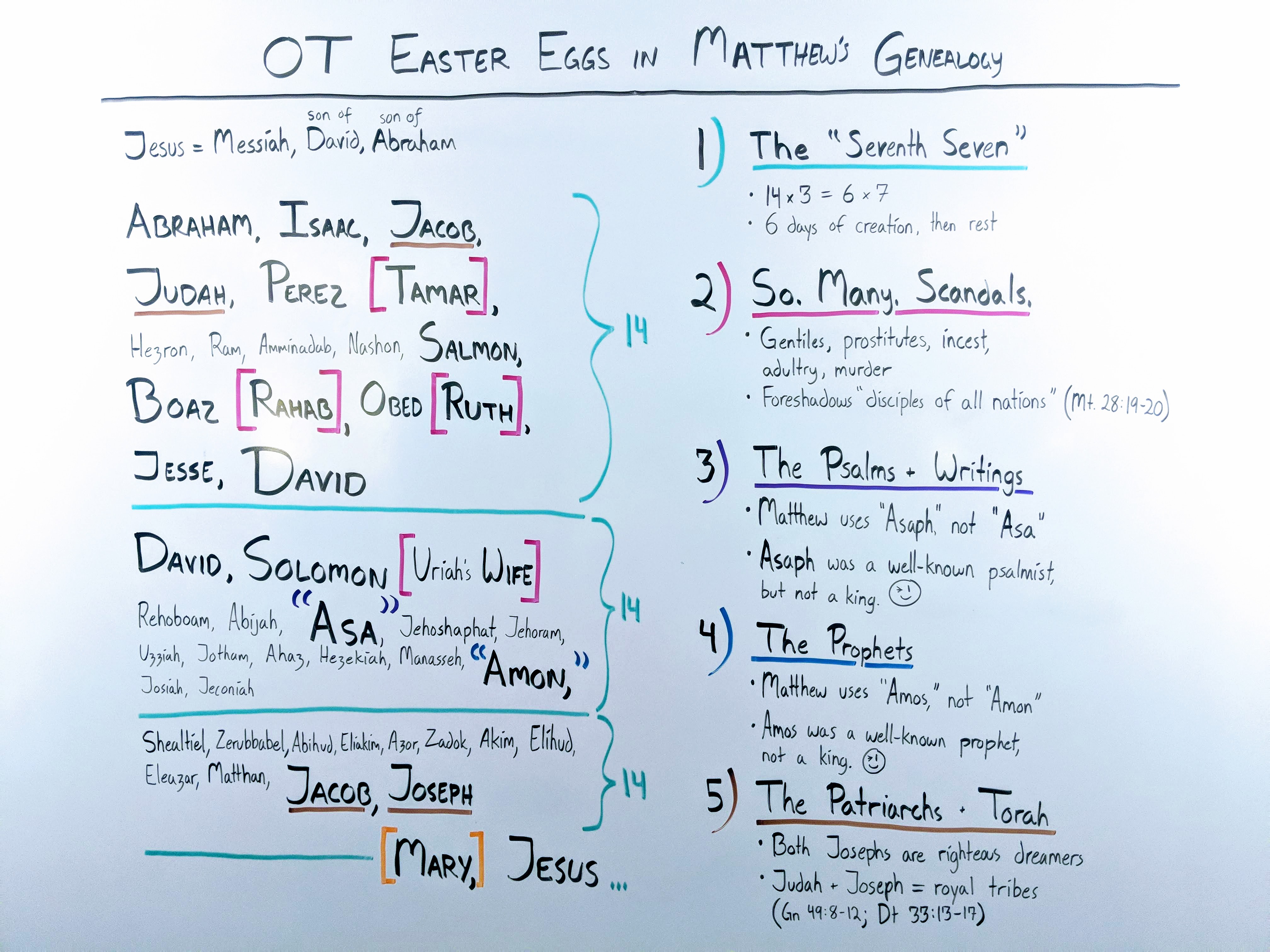 Welcome to the New Testament?

If you’re familiar with The Bible, then you know that the Bible falls into two large sections:

And right at the beginning of the New Testament, we see the Gospel of Matthew. And it opens with the line, “The genealogy of Jesus, the Messiah, the son of David, the son of Abraham.”

This list of names might seem boring to a modern reader. But to someone who’s really familiar with the Old Testament, there are some really cool “Easter eggs” that you can find in this that make hints at what Matthew‘s going to cover in the rest of his gospel.

(Remember: Matthew’s story doesn’t end here. This is just the beginning. After this, we start to read about the birth of Jesus and then his miracles and teachings, and ultimately his death and resurrection. So this is just the overture.)

1. Matthew puts the reader in the “seventh seven”

Now if you’re familiar with The Bible, you know that the number seven is pretty prominent. Right at the beginning of the Bible, inthe book of Genesis, God creates the world in six days and then rests on the seventh. And that becomes a pattern that the people of Israel follow week to week. They work six days and then they rest for one. (That seventh day is called the Sabbath.)

Now for just a little math:

The people reading his gospel would’ve been after that last generation, which would put them in the following generational bracket: the “seventh seven.” So, just like in the Genesis story of six days of creation culminating in a time of rest, we have six periods of time culminating in the time of the Messiah—a king who was supposed to bring Israel and the nations peace, justice, and rest.

But here’s the deal—most of these mothers represent things that the Jews wouldn’t expect in the introduction of a Messianic King.

That’s not the most flattering sort of information that you want to be bringing into people’s mind when they’re reading the genealogy of a king.

So what does that tell us about the story that Matthew is going to share? Well, in the rest of Matthew’s gospel, we’re going to find that Jesus subverts the Jews’ expectations when it comes to their Messiah. He’s going to challenge the way they think about the Sabbath, giving, obedience, and the kingdom of heaven itself. The Jews expected a Messiah who would liberate Israel and rule the other nations. And yet Matthew introduces Jesus by highlighting how his bloodline includes other nations.

It’s a clue that points to the very end of Matthew’s gospel. Jesus rises from the dead and he tells his disciples to go and make more followers of him from all the nations. Not just Israel. And so we can see right at the beginning a glimpse of where Matthew’s taking us. Jesus is going to surprise and offend a lot of the Jewish leaders’ expectations with his good news of this very inclusive gospel. He’s a great Messiah, but a lot of people don’t recognize him because they’re expecting something different.

Let’s look at something else that someone who was very familiar with the Old Testament might see when they’re looking at Matthew’s genealogy of Jesus. If you’re reading the genealogy in your English Bible, then you’re going to come to that second bracket. And you’re gonna see David, Solomon, Rehoboam, Abijah, and so on.

When you see “Asa” in your English Bible, stop. Because while Asa was the name of the actual king of Jerusalem, Matthew doesn’t write the name Asa. Matthew writes another name. If you look it up in Greek, you’ll see that Matthew actually uses the word “Asaph,” not Asa. Asaph was a well-known psalmist. He penned several of the Psalms. Someone familiar with the Old Testament would know this.

This is almost like a wink to the audience, because we’re going to see Jesus as the fulfillment of all Scripture. And so Matthew was bringing in the Psalms and the wisdom literature that the Hebrews already had in Scripture and saying this points to Jesus as the Messiah too.

4. “Amon” brings in the prophets

Now we see something really similar next up. And that is when we get to the name of Amon. Amon was the name of a king. But it’s the same situation as with Asa: in the English Bible we see “Amon,” but in Greek, Matthew doesn’t say Amon. He uses another name. He uses the name Amos.

Matthew was giving another wink to the audience. He’s saying, “Hey, not only am I going to show you that Jesus is the culmination of the psalms and the writings. But also, Jesus is the one the prophets spoke about.” Matthew brings in those prophecies that are fulfilled time and time again as he introduces this gospel. But he’s giving us a hint right in the genealogy.

Here’s a screenshot from the NA 27th Ed. Greek New Testament. “Asaph” is highlighted in yellow, “Amos” in green.

Not only do we already have the reference to creation with six sevens and the time of the Messiah, we also see a really cool combination of certain names in this genealogy. Now way back in Genesis, which is part of the Torah, we meet a man named Jacob. And Jacob has 12 sons. Each of these sons becomes the patriarch of a subgroup of the nation of Israel called a tribe (that’s where we get the 12 tribes of Israel).

Now two of those sons stood out and two of those tribes had a royal reputation from very, very early on in the Bible. In fact, in the Book of Genesis when Jacob is blessing his son, Judah, he says, “The scepter will never depart from Judah.” Jacob says that Judah’s brothers will bow down to him (Gn 49:8, 10). Which we see in David. David’s from the line of Judah and David was the greatest king of Israel.

And so we have two sons of Jacob in the Torah that are mentioned as having this royal destiny. We see that in this genealogy too. So right up top, we have Jacob and then Judah. And then right at the end, right before Jesus is introduced, we have Joseph. Now we all know about Mary and Joseph. But guess what Joseph’s father’s name is?

So we have Jacob and Judah. And then we have Jacob and Joseph. Really, really interesting to see that woven in here because that brings in bits of the Torah and Jewish history when we’re looking at who’s going to be the king of the Jews.

Another really fun tidbit is that Joseph in the Old Testament was known as a dreamer. He had dreams and he could interpret dreams. The person who has the most recorded dreams in the Bible is Joseph, who was called the father of Jesus.

Right at the beginning of the New Testament, we have the psalms, the prophets, and the Torah. All three elements of the Old Testament combining to point to Jesus as the Messiah and that promised king. Not only of Israel, but of all nations. And that’s why beginning Matthew and the entire New Testament with this names is such a fascinatingly great idea. Matthew ties together the entire Old Testament and says it all just points straight to Jesus. And then he starts telling Jesus’ story.