The Beginner’s Guide to the Prophets in the Bible

When modern folks talk about “prophets” and “prophecy,” they’re often referring to someone foretelling future events. However, in the Bible, the prophets played a much larger role.

In this guide, we’re going to cover a few important points: 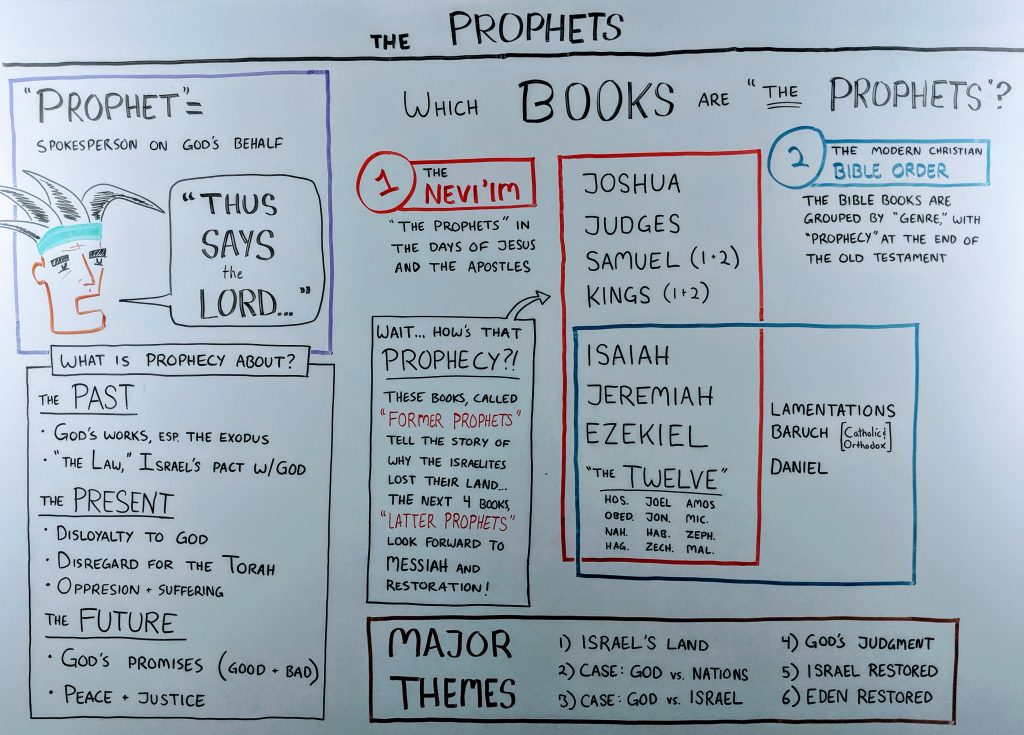 When the Bible mentions prophets, it’s usually referencing the following:

If we understand both of these uses of “prophet,” then we’ll be much better prepared to understand the Bible—both the cryptic prophetic passages and the Scriptures as a whole.

What is a prophet?

Prophets are humans who speak on God’s behalf. Some of their messages are more dramatic than others: some prophets (like Ezekiel and Zechariah) see elaborate visions, while others simply call the people to remember their allegiance to Israel’s God and the Torah (like Haggai and Malachi).

Many people utter or write prophetic statements in the Bible, but not all of them are specifically referred to as prophets. Perhaps the best example is Saul, who would become the king of Israel. Saul falls under the influence of God’s spirit and begins prophesying—although we don’t know what he said (1 Samuel 10:9–12). So while Saul technically speaks prophesy, his role in the story of Israel isn’t a prophetic one, and so the Bible doesn’t treat him like a prophet.

It’s also important to note that the Bible mentions false prophets, individuals who claim to speak on God’s behalf, but don’t. And to further complicate things, while God has his own prophets, there are prophets who speak on behalf of other gods, too. The most famous example of this takes place in the showdown between Elijah and 450 prophets of the Canaanite god Baal (1 Kings 18:16–39), when Elijah demonstrates he’s the one who speaks on behalf of Israel’s true God.

The Bible names many prophets, but some of the most significant prophets to remember are:

In the Bible, and especially in the Old Testament, a prophet has the role of holding people accountable to the God of Israel. They do this through the ministry of prophecy, which has a much broader meaning in the Bible than we’re used to.

When you encounter prophecy in the Bible, it usually refers to a message claiming to be of divine nature or origin. Since most of the Bible focuses on the ancient Israelites’ relationship with their God, it makes sense that most of the Bible’s prophecy comes from the same God. These messages come in many forms: dreams, poetry, sermons, and even dramatic physical stunts—like when the prophet Isaiah went nude for three years to signify how the Assyrians would strip and shame the Egyptians (Isaiah 20:3).

Although it’s easy to think of prophecy as a message concerning the future, the prophets of the Bible speak of the past, present, and future.

Prophecies about the past

It’s common for a prophet to reference past events in Israel’s history, usually the stories in the Torah. These stories usually serve to remind Israel about their special pact with their God. If Israel remained loyal to God, they would enjoy his blessings and protection in the land he promised to Abraham in the book of Genesis.  But if they betrayed him by serving other deities or oppressing vulnerable people, God would judge Israel, removing his protection and exiling them from their land.

That’s why the prophets often bring up both the acts of kindness that God showed Israel—along with examples of times God judged other nations. The most common acts of God that the prophets bring up occurred during the exodus from Egypt to Canaan, specifically:

These come up again and again in the Bible’s works of prophecy. They remind the prophet’s audience of their alliance with God—an alliance that relies on them being loyal to him.

Prophecies about the present

The prophets often contrast God’s past kindness and provision for Israel to the nation’s disloyalty to him and unkindness to each other in the present. The prophets often build a case on God’s behalf, citing current issues like:

Prophets call out these wrongdoings, urging people to return to the teachings of Moses. If the people don’t turn from their ways, then prophets often warn them of what lies ahead …

Prophecies about the future

The prophets often envision five types of future scenarios. Two of them are specific to Israel, two are specific to the nations of the world, and one is often available to anyone listening.

Under the Torah, the people of Israel enjoyed God’s blessings and protection if they kept his laws. But if they betrayed him, they agreed to incur his judgment: God would remove his protection and allow Israel to be consumed by larger, more powerful foreign nations. The prophets often warn the Israelites that their oppression and idol worship is leading them toward this future.

The most prominent example of this prophecy coming to pass is in the siege of Jerusalem by Nebuchadnezzar.

In the book of Deuteronomy, the prophet Moses foresees Israel violating the Torah enough to get exiled from their land. However, he also sees God mercifully regathering the descendants of Israel and bringing them back home. Throughout the Old Testament, the prophets anticipate this restoration—particularly a restoration of Jerusalem. They envision God ruling the restored nation of Israel from the holy city, sometimes through a Messianic descendant of King David.

3. God’s judgment on the nations

The Old Testament is mostly written for and by the ancient Jews, which means the prophets tend to speak about Israel’s God, Israel’s land, Israel’s people, and Israel’s future. But they also see God as the supreme divine being in the cosmos: he’s at the top of the universe’s org chart, and the rest of the gods (not to mention the humans) ultimately answer to him.

It’s bad enough to oppress poor families and towns. But some kings became so power-hungry that they began oppressing other nations, attacking weaker people groups to make their own people stronger. The prophets of Israel’s God believed that this behavior was unacceptable, and that these empires would eventually be overthrown with in God’s time, God’s way.

4. God’s restoration of the nations

But while the prophets see God putting an end to violent empires, they also look forward to a time when the nations of the world are at peace with one another under the guidance of Israel’s Messiah. Many of the prophets end their books on this note, with all the nations of the world enjoying the blessings of Israel’s God. (Which is what they believed God promised their ancestor Abraham at the beginning of the Torah.)

The messages of the prophets are often dire and gloomy, but the prophets usually encourage their readers and listeners to turn away from the path they’re on. The prophets have hope that, if reformation takes place, then God will relent concerning his judgments. The disasters that the prophets see coming don’t necessarily need to happen—or they can at least be postponed for a generation that chooses to ignore the prophets.

The future scenarios that the prophets see are presented in long poems, dramatic displays, and vivid dreams. They’re not always direct, clear statements about what’s going to happen. For example, Jesus, Peter, and Paul were convinced that the Old Testament prophets anticipated Jesus’ resurrection from the dead (Acts 2:31, 1 Corinthians 15:4). But according to the accounts of Jesus’ life in the four gospels, Jesus’ closest followers didn’t understand that the Messiah had to die—let alone rise again—until after they’d already encountered the risen Jesus.

Beyond this, often times the prophets will blend those future scenarios we discussed above together. Because the Jews lived under the rule of foreign empires, prophecies about Israel’s restoration often coincide with prophecies about judgment for the kingdoms oppressing them.

Furthermore, while a prophecy might be uttered all at once, prophecy isn’t always fulfilled all at once. For example, God promises David a son, a descendant who will rule Jerusalem forever. Parts of this prophecy are fulfilled in David’s literal immediate heir, Solomon. But other parts of this prophecy went unfulfilled for a long, long time—while Christianity claims Jesus Christ was that promised king, Judaism still awaits a Messiah and deliverer.

The books of “the Prophets”

The prophets were the people who spoke on God’s behalf. But “the Prophets” (with a capital P) refer to a group of books in the Old Testament. These are the books that expound on the relationship between God and Israel after they formed an alliance in the Torah.

Here’s where it gets a bit tricky: the list of specific books considered “the Prophets” will change depending on which Bible you’re reading. Ask a modern Christian, and they’ll list the final 17 books of the Old Testament: Isaiah–Malachi. (Eighteen books for Catholic and Orthodox Bibles.)

But if you were to ask Jesus, Peter, or Paul, you’d get a different list. First-century Christians didn’t have the New Testament that we do today—it took us Christians centuries to agree on those books. Instead, they only had the books we call the Old Testament, or the Tanakh. The Tanakh was arranged differently from the modern Old Testament (you can see how here)—with the section called Nevi’im (Hebrew for “Prophets”) in the middle.

This section included most of the books in the modern Prophets (except Lamentations and Daniel). It also included the narrative-heavy books of Joshua, Judges, Samuel, and Kings. These books are “prophetic history,” books that told the story of how the people of Israel did (or didn’t) uphold the Torah, and how God kept his word to protect and discipline his people.

Christians divide the books of prophecy into two large groups: the Major Prophets and the Minor Prophets. These designations are more about length than rank. While Jeremiah isn’t considered more inspired than the other prophets, his is the longest book of the Bible—that’s a major contribution compared to, say, Obadiah’s single-page work.

Depending on who you ask, Christians might list three to five books of the Old Testament as the Major Prophets. The three that are always counted as part of this group are Isaiah, Jeremiah, and Ezekiel.

In addition to these, some Christians group the book of Lamentations with the Major Prophets (as it’s associated with Jeremiah). The book of Daniel is sometimes included with the Major Prophets too—given Daniel’s intense visions about the interplay between Israel’s God and the empires of the world. However, neither of these books come close to the sheer volume of Isaiah, Jeremiah, and Ezekiel.

This group of twelve books are all relatively short (compared to the three big books of the Major Prophets). They all generally deal with the same themes though: God’s pending judgment on both the people of Israel and the surrounding nations, as well as his coming restoration for Israel and the world.

The prophets are important

Much of the Old Testament is written and preserved by people who wanted God’s people to remain loyal to him. These books were valuable to the ancient Hebrews, and for people who want to follow God today, they’re valuable still.